One profound result of Einstein’s theory of general relativity: gravity bends the path of light, much as it affects the path of massive objects. Very massive astronomical bodies, such as galaxies and galaxy clusters, can magnify the light from more distant objects, letting astronomers observe objects that would ordinarily be too far to see. Even the gravity from planets affects light, allowing researchers to detect worlds in orbit around other stars. This effect is called “gravitational lensing”, and it’s used to discover faint astronomical objects and to study the “lenses” themselves through their gravitational effects.

According to general relativity, gravity can be described as a distortion in the structure of spacetime. Objects like planets and even light follow the straightest possible path within that structure, but the stronger the gravity, the more curved the paths become.

The light-bending effect was first demonstrated for the Sun during a solar eclipse in 1919. Since then, astronomers have used gravitational lensing from galaxy clusters to discover far-off galaxies, and identified exoplanets from the tiny amount of lensing they produce. Both strong lensing effects from very massive objects and “microlensing” from planets are part of the modern astronomical toolkit. 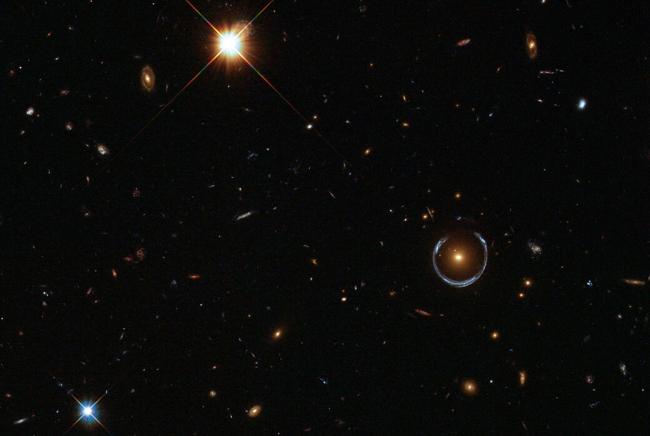 The ring in this picture is created by gravitational lensing due to the red galaxy at its center, which distorts the image of a distant blue galaxy. The magnification from the lens lets us see the blue galaxy, which would otherwise be too faint.

One Source, Many Images

When light from a distant galaxy passes by a massive galaxy or galaxy cluster closer to Earth, gravity bends the path of the light. Since the source galaxy emits light in all directions, many of those paths can converge on us, focusing the light. That makes the source galaxy appear brighter than it would ordinarily appear from Earth, to the point where gravitational lensing can let us see objects too faint to observe otherwise. This “strong lensing” effect makes gravity act as a telescope.

When the source galaxy’s light follows multiple curved paths near the gravitational lens, it results in multiple images of the same galaxy or smears the image into a blur or even a ring. These effects provide more astronomical data on a single galaxy than would be available from a single image. The images made by strong lensing can also tell us about the “lens” itself: how much mass it has, and how that mass is distributed.

In the case of “weak lensing”, gravity doesn’t create the image of a distant galaxy, but it still produces a measurable useful effect. Collective light from many galaxies or other sources passing near a galaxy cluster is brightened by weak lensing, letting researchers map the mass of the lens. The “Bullet Cluster” is a case where a collision between two galaxy clusters separated the dark matter from the hot gas in the system, which can be seen by comparing the X-ray observations with weak lensing data.

Weak lensing is also a way to map out the location of all galaxy clusters in the universe, even those that can’t be seen directly. Some of the light from the cosmic microwave background passes around gravitational lenses on its way across the universe, like daylight filtering through a forest. Astronomers use the collective distortions of millions of galaxies to reveal the way they distribute themselves on the largest scales. In that way, weak lensing provides an independent measurement of dark energy, the substance causing the accelerated expansion of the universe.

The gravity from stars obviously is far weaker than that of a galaxy cluster, but in some cases astronomers can still measure lensing from them. “Microlensing” is the effect when one star passes in front of another from our point of view. Stars within the Milky Way don’t appear to move quickly from our perspective, but occasionally one crosses another. When that happens, microlensing makes the background star’s light appear brighter for a period of weeks to months.

If the closer star is host to exoplanets, those planets alert the microlensing slightly, which astronomers can detect under the right circumstances. Microlensing has let us find smaller planets orbiting farther from their host star than other methods can do easily. Large-scale surveys such as the Korea Microlensing Telescope Network (KMTNet) detect thousands of microlensing events every year, but the number of planets identified this way is still small. Next-generation observatories like the Nancy Grace Roman Space Telescope (NGRST) will potentially detect even more in the coming years.

A Microlensing Event Seen from Three Positions in Space