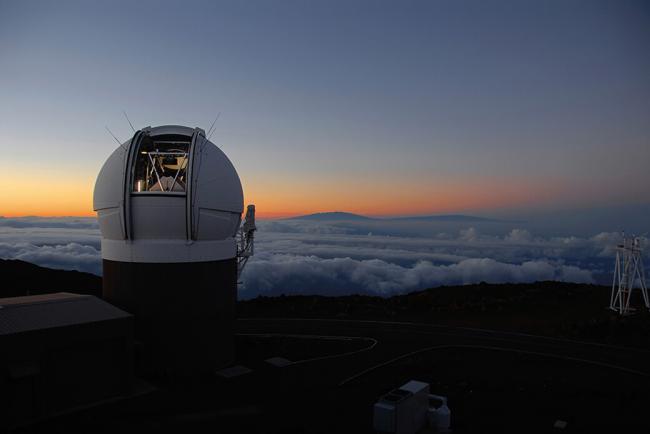 The Pan-STARRS1 Telescope is located on Halealakalā in Maui, Hawaii. The dome of the observatory is seen standing open at sunset to prepare for a night of observations.

From ancient times, humans have watched for changes in the sky. Modern astronomers may not be looking for omens, but they still monitor things that move or change in brightness, including asteroids and comets that might pose a threat to Earth at some point in the far future. Less urgently, but no less important scientifically, tracking changes in the sky can reveal new objects in the outer Solar System, variable stars, or transient events like supernovas.

Spotting transient events requires vigilance, which is the value of the Pan-STARRS program. The 1.8-meter Pan-STARRS1 Telescope (PS1) was built with the world’s largest astronomical camera, with nearly 1.4 billion pixels. This camera takes four exposures of a given patch of the night sky in an hour, comparing the four images automatically to identify anything that had changed during the time. Nearly anything changing that quickly is likely a near-Earth object (NEO): asteroid or other small Solar system body close to Earth. Pan-STARRS1 is responsible for the identification of over half of NEOs larger than 140 meters in size, and most newly-discovered comets.

CfA researchers use PS1 data to look for new objects in the outer Solar System: the small worlds of the Kuiper Belt, comets, moons, and the icy asteroids called “centaurs” that reside among the giant planets. These small objects are relics of the early days of the Solar System, and their orbits reveal how the planets and other worlds interact to create the trajectories we observe today.

Pan-STARRS1 operated from 2008 to 2014. The Pan-STARRS2 project began in 2013, with a second 1.8-meter telescope added to the first for an even greater ability to monitor the sky for changes.