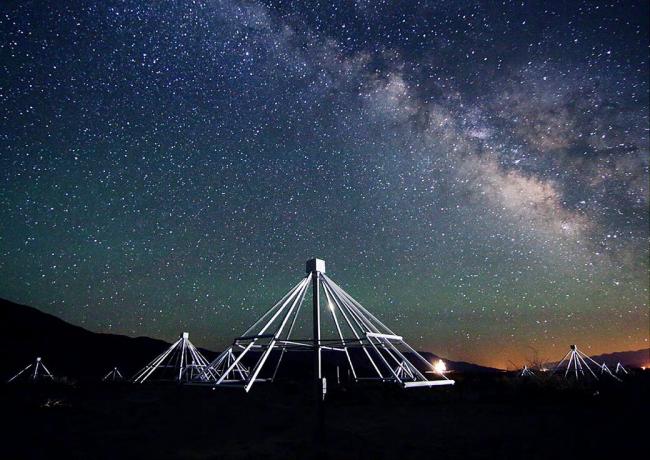 A few of the 256 antennas making up the LEDA Telescope at Owens Valley in California, seen beneath the Milky Way. The remaining 256 antennas are located in New Mexico.

The early cosmos had no stars or galaxies. After the first hydrogen and helium atoms formed, about 380,000 years after the Big Bang, gas gradually began forming the cold clouds where the earliest stars could form. This era is known as the cosmic Dark Ages: without stars or galaxies to illuminate the primordial gas, we have very little information about what happened. We don’t even know exactly when those stars formed, except that it was approximate 100 to 300 million years after the Big Bang.

The nature of the first stars is very important for what follows in the history of the universe. Since none of this first generation of stars seem to be around today, astronomers think they must have been very large and short-lived, dying in supernova explosions that seeded the cosmos with the heavier elements needed to form later stars, planets, and life. In addition, the supermassive black holes that sit at the heart of nearly every galaxy must have had their birth in this period of time. These early stars and black holes stripped electrons from much of the hydrogen gas in the universe in an event called “reionization”, eventually producing the hot plasma known as the intergalactic medium we see today.

LEDA is designed to look at the conditions under which the first stars formed. Neutral hydrogen gas emits radio waves with a wavelength of 21 centimeters. As the universe expanded, this wavelength was stretched by a factor of 15 to 30 times. That combination of faintness and long wavelength requires a very large and sensitive telescope, which is where LEDA comes in.

The 512 antennas used for LEDA are collectively known as the Long Wavelength Array (LWA) of radio telescopes, though they don’t look like typical telescopes. Rather than focus radio waves, they work together to collect as many photons as possible from the Dark Ages. Despite the lack of mirrors, LWA’s design enables it to create images of the fluctuations in the primordial hydrogen for the LEDA project, allowing it to measure the conditions in the hydrogen gas during star formation and reionization.

The first cluster of 256 LWA antennas was built at the site of the National Radio Astronomy Observatory’s Jansky Very Large Array in New Mexico in 2011. This was followed by the second cluster at Caltech’s Owens Valley Radio Observatory in 2013, which covers a larger amount of ground to produce clearer images. These 512 antennas are coordinated by computer to allow them to act as a single large virtual telescope.

Scientists at the CfA are part of the large LEDA collaboration, which is supported by the National Science Foundation. The collaboration operating LEDA includes the Center for Astrophysics | Harvard & Smithsonian, Caltech, Virginia Tech, the University of New Mexico, and the University of California Berkeley.