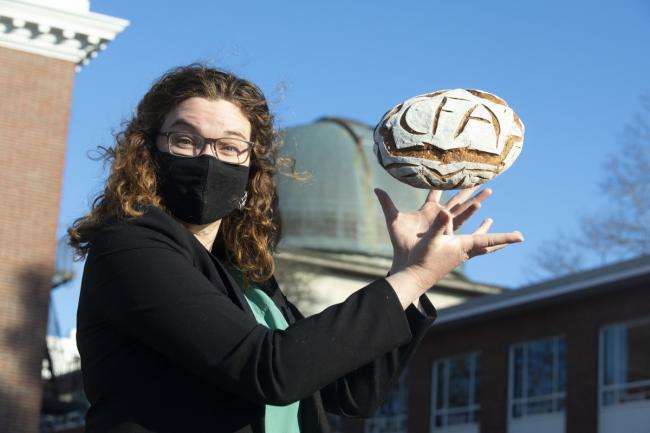 Claire Lamman, astronomy graduate student and expert space baker visits CfA with homemade bread. In the background is the observatory.

When Harvard Ph.D. student Claire Lamman isn't helping map the universe, there's a good chance she might be baking a piece of it.

Take the astro cake she made last month that had a buttercream frosting rendition of the Milky Way galaxy. Or the Saturn cake she made a few months prior, a confection complete with rings (made of hardened caramel and walnuts) floating around a glazed, planet-shaped lemon-blueberry creation. Most recently, Lamman marked the landing of the Perseverance on Mars with a loaf of sourdough rye bread, adorned with a likeness of the new rover carved into the crust.

"I found a hobby that seems to make people around me happy — especially hungry grad students," said Lamman, who captures it all on her social media accounts, @lamman_cake and @ClaireLamman (Instagram and Twitter, respectively). There, the second-year Graduate School of Arts and Sciences student studying astronomy and working as a researcher at the Center for Astrophysics | Harvard & Smithsonian posts many of her space- and research-themed bakes, which range from telescopes and space stations to planets, stars, and even statistical equations and graphs.

"Online, the most common reactions are either 'How did you do that?' or bad space puns, which are appreciated,” Lamman said. "I've gotten comments on Twitter from official space agencies [NASA, the European Space Agency, and the Canadian Space Agency] and a few astronauts, including Chris Hadfield."

Some of the more complicated bakes, like multilayered French opera cakes, require technical prowess and patience. Bakes can take anywhere from a few hours to two days. For example, most cakes take about three to six hours active time, but she'll start thinking about the design weeks in advance. She usually gets it to come out as she pictured it in one shot. Sometimes, though, it takes a few tries, like the Perseverance sourdough.

The reactions often make the work worth it, she said. Most memorably, she baked a sugar cookie for Jocelyn Bell Burnell, the astrophysicist from Northern Ireland who discovered the first pulsar signals, compact stars that emit beams of electromagnetic radiation. She is one of Lamman's personal heroes.

"She happened to be visiting the CfA on Valentine's Day, so I made a heart-shaped cookie with the signal she found piped on (it sort of looks like a heartbeat)," Lamman said. "I was terrified she would think a gift like that was bizarre, and my hand was shaking when I gave it to her. But Jocelyn was amazed and loved it! It was surreal to have an astronomy legend excited about something I made."

Lamman started baking three years ago to have something to decorate. She taught herself by watching YouTube videos. In 2019, she elevated it from just an occasional hobby to something more serious when she came to the Graduate School of Arts and Sciences. She offered to bake something for her degree cohort. But these were not to be simple desserts. Lamman spent time learning about her colleagues' work so she could make something more personal, ultimately baking 15 cookies, some with plotted graphs depicting their research.

She has also made a few cakes. One was of the Sommers-Bausch Observatory, the campus telescope at the University of Colorado Boulder, where she did her undergrad. The dome was a fondant-covered vanilla cake.

"Many of my peers are doing exciting research but aren't used to it being celebrated in this way," Lamman said. "I am especially honored when someone puts something I made in one of their research presentations," which has happened a few times.

Lamman believes her baking has many layers.

"Too often science outreach tends to cater to people already interested in STEM," she said. "Sharing science-related art can be a way to step out of that STEM bubble."

That's because creative outlets can often help break down some old tropes about scientists, she said.

"[It's] showing that creative people can succeed — and are necessary — in science," Lamman said. "There's a bizarre perception that people either have a 'creative' or a 'scientific' mind. But most science breakthroughs are made when someone has a new way of looking at a problem or a novel observing technique. When scientists share their creative projects, it not only shows that we can be creative, but can give us an opportunity to point out how that creativity manifests itself in our work too."

Lamman makes this clear when she does outreach work with teens and children to get them interested in science.

"Showing cakes to them is fantastic because if they're not interested already and then you show them a cake, their eyes light up," she said.

When Lamman isn't baking, much of her time is spent doing homework and on research for the CfA, where she is part of the Dark Energy Spectroscopic Instrument (DESI) collaboration. The instrument is mounted on the Mayall Telescope at the Kitt Peak National Observatory, southwest of Tucson, Ariz. Its mission is to measure the spectra of more than 30 million galaxies to see how far away each galaxy is in order to map the nearby universe.

Lamman interprets parts of the DESI data and helps find ways to condense different statistics into formats and visuals that are easier to communicate. Like many, she’s been working virtually during the pandemic.

For the 24-year-old, working in astronomy has been a lifelong goal. "When I was in kindergarten, we had our teacher read us about a day in the life of an astronaut, and that, that really stuck with me," she said. “Since then, I’ve always wanted to study astronomy."

At times, she had doubts, and at one point didn’t believe she was smart enough. But she persevered through the difficult theories and calculations and soon saw she wasn't giving herself enough credit. Surprisingly, she also realized the material got easier to understand.

"Once you're learning things at a deeper level, it felt like it was easier to learn because it was more satisfying,” Lamman said. “You want to keep learning more."

The same can be said for her baking. Soon the only problem will be what to do with all the goods.

"I'll try to get other people to eat it," she said.

This story originally appeared in the Harvard Gazette.