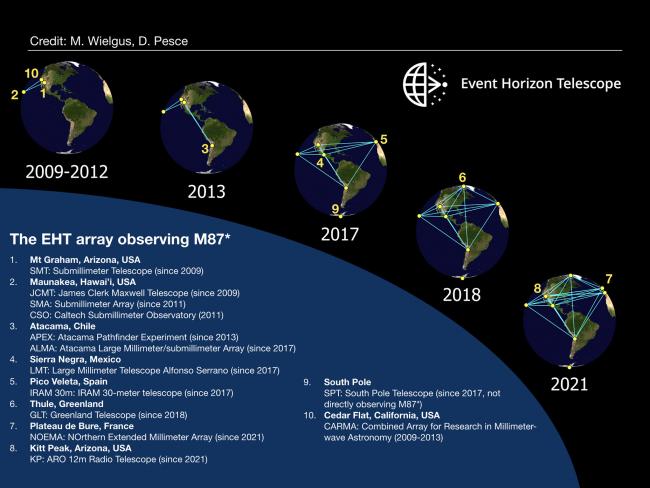 Cambridge, MA - Analysis of previously unpublished data from observations of M87* between 2009 and 2013 by scientists at the Event Horizon Telescope (EHT) has revealed that the crescent shadow of the black hole is wobbling, and has rotated significantly over the past ten years of observation. Published today in The Astrophysical Journal, and led by scientists from the Center for Astrophysics | Harvard & Smithsonian (CfA), the study focused on the morphology of the black hole over time, and was made possible by advances in analysis and understanding achieved as a result of EHT's groundbreaking black hole photo in 2019.

"EHT can detect changes in the M87 morphology on timescales as short as a few days, but its general geometry should be constant on long timescales," said Maciek Wielgus, an astronomer at CfA, Black Hole Initiative (BHI) Fellow, and lead author on the paper. "In 2019, we saw the shadow of a black hole for the first time, but we only saw images observed during a one-week window, which is too short to see a lot of changes."

Combining previous data from 2009-2013 with data leading up to 2019 revealed that M87* adheres to theoretical predictions. The shape of the black hole's shadow has remained consistent, and its diameter remains in agreement with Einstein’s theory of general relativity for a black hole of 6.5-billion solar masses. “In this study, we show that the general morphology, or presence of an asymmetric ring, most likely persists on timescales of several years," said Kazu Akiyama, a scientist at the MIT Haystack Observatory, and a participant on the project. "This is an important confirmation of theoretical expectations as the consistency throughout multiple observational epochs gives us more confidence than ever about the nature of M87* and the origin of the shadow."

While the crescent diameter remained consistent, new data also proves it was hiding a surprise: the ring is wobbling, and that means big news for scientists. For the first time, scientists will be able to catch a glimpse of the dynamical structure of the black hole’s accretion flow; studying this region holds the key to understanding phenomena like launching relativistic jets. "The morphology of a relativistic jet—low density outflow of tremendously energetic particles and fields—for example, is key to understanding the interactions with the surrounding medium in a black hole’s host galaxy," said Richard Anantua, a postdoc at the Center for Astrophysics | Harvard & Smithsonian and BHI Fellow, adding that studying morphology weaves an important story about black holes and their hosts.

The gas falling onto a black hole heats up to billions of degrees, ionizes and becomes turbulent in the presence of magnetic fields. This turbulence causes the appearance of the black hole to vary over time. "Because the flow of matter falling onto a black hole is turbulent, we can see that the ring wobbles with time," said Wielgus. "The dynamics of this wobbling will allow us to constrain the accretion flow." Anantua added that it is important to constrain accretion flows because, "The accretion flow contains matter than gets close enough to the black hole to allow us to observe the effects of strong gravity, and in some circumstances, allows us to test predictions from general relativity, like we’ve done in this study."

In the current study, multiple years of data allow scientists to perceive the amount of variability in the ring's appearance. "Actually, we see quite a lot of variation there, and not all theoretical models of accretion flow allow for this much variability," said Wielgus. "As we obtain more measurements in the future, we will be able to confidently put constraints on models and rule some of them out."

Early data in the EHT collaboration were taken by just a few telescopes and a few dozen people. The CfA's Submillimeter Array (SMA)—a radio telescope located on Mauna Kea, Hawai'i—was among the small group that started the collaboration and captured the early data used for the current study. Simon Radford, Operations Director at the SMA said, "Hawai’i telescopes pioneered this technique over the past decade and were crucial to the success of early EHT experiments," adding that the combination of the technology, telescopes, and location are what made the early data useful and meaningful.

Ten years later the data has become an invaluable tool to understanding not only M87, but all black holes. "These early EHT experiments provide us with a treasure trove of long-term observations that the current EHT, even with its remarkable imaging capability, cannot match," said Shep Doeleman, Founding Director, EHT. "When we first measured the size of M87 in 2009, we couldn't have foreseen that it would give us the first glimpse of black hole dynamics. If you want to see a black hole evolve over a decade, there is no substitute for having a decade of data." Wielgus added that the continued analysis of past observations, along with new observations "will lead to a better understanding of the dynamical properties of M87, and black holes in general."