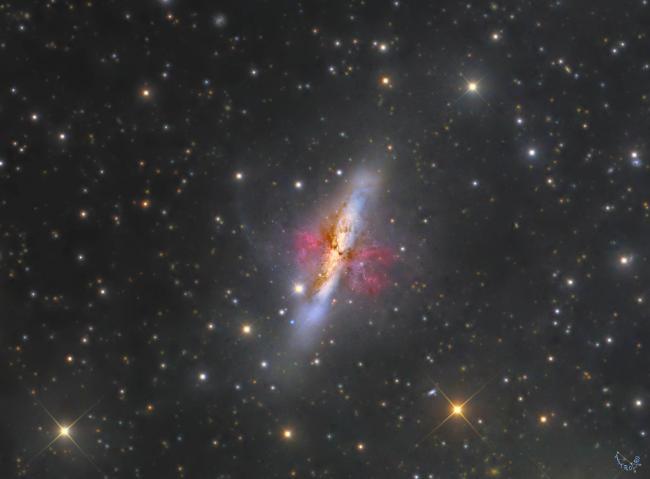 An optical image of the luminous infrared superwind galaxy M82.  The image highlights in red the wind emission in the radiation from filaments of ionized hydrogen. Some of the gas in the superwind, enriched in heavy elements forged in massive stars, will eventually escape into intergalactic space. Astronomers used Stratospheric Observatory for Infrared Astronomy (SOFIA) to map the magnetic field that drives this wind in M82.

Messier 82 (M82) is a luminous infrared galaxy about twelve million light-years away from the Milky Way. Its burst of star formation powers the radiation and drives a bipolar superwind that originates near the core of the galaxy. The wind extends perpendicular to the galactic plane out into the halo and intergalactic medium; ionized gas in the wind traces a continuous structure that is about thirty-four thousand light-years long. Astronomers think that star formation along the superwind is exciting the gas and also generating X-ray emission, the latter produced by associated shocks.

M82 is not unique among galaxies in having an outflowing wind although because it is relatively nearby and seen nearly edge-on, its outflow is easier to study. A key question relates to the material flowing in the wind. If it escapes and is deposited into the space between galaxies, it enriches the intergalactic medium, but if it recirculates back onto the galaxy it will redistribute the material and can stimulate star formation in outer regions. The magnetic field in the wind both drives and helps to shape the outcome. Details depend on whether the field lines spread and "open" into space or are "closed," curling or looping around the galaxy and staying more tightly confined. To date, the magnetic fields in galactic outflows have been studied using the polarized radiation emitted at radio wavelengths by electrons moving in the ionized flow. In M82, previous studies have indeed found magnetic fields stretching from the central region and extending perpendicularly to the disk, but the interpretation is complex and these studies differ on whether or not the field lines are open or closed.

CfA astronomer Mahboubeh Asgari-Targhi was part of a team that recognized that scattered infrared radiation from dust grains aligned by these magnetic fields could resolve the debate. They used the High-resolution Airborne Wideband Camera-plus (HAWC+) on NASA’s Stratospheric Observatory for Infrared Astronomy (SOFIA) to map the magnetic fields in M82, and combined their results with a modified technique more commonly used by solar astronomers who are studying the Sun’s magnetic fields. The novel approach extrapolates the measured field with some reasonable approximations about the electrical currents present; the scientists complete the picture with other polarization data from the literature. They show clearly, for the first time, that in M82 the field lines are open, and also that the energy in turbulent motions is comparable to that in the magnetic field. The results indicate that the outflow winds associated with starburst phenomena in galaxies inject enriched material into the intergalactic medium.

"The Strength and Structure of the Magnetic Field in the Galactic Outflow of Messier 82," Enrique Lopez-Rodriguez, Jordan A. Guerra, Mahboubeh Asgari-Targhi, and Joan T. Schmelz, The Astrophysical Journal 914, 24, 2021.