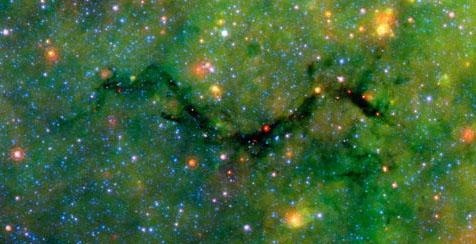 An infrared image of an infrared dark cloud (IRDC) taken by the IRAC camera on the Spitzer Space Telescope. The dark filament of material is very cold, rich in molecules, and a potential birthplace for new stars. A far infrared and millimeter study of very cold IRDCs has found evidence for the early stages of star formation and support for several theoretical scenarios.
S. Carey (SSC/Caltech), JPL-Caltech, NASA

Infrared dark clouds (IRDCs) are dark patches of cold dust and gas seen in the sky against the bright diffuse infrared glow of warm dust in our galaxy. IRDCs are massive, cold, and rich in the molecules needed to facilitate the gravitational collapse of gas into stars, and hence IRDCs are natural sites for studying star birth. The detailed processes that shape the formation of massive stars (those of more than a few solar-masses) remain unclear even after decades of study, partly because these stars tend to form relatively quickly and are accompanied by particularly intense radiation. One theoretical scenario suggests that turbulence in the gas supports the material against collapse until the core grows massive enough to overcome it; another suggests that low mass stars form first and grow into more massive stars through accretion.

The Herschel Space Telescope surveyed much of the sky at five far infrared wavelengths (all of them more than one hundred times longer than optical wavelengths) where very cold interstellar dust - only tens of degrees kelvin - emits most prominently. Many IRDCs have regions that are so cold that the Herschel detectors were not sensitive enough to see them at the shortest of these bands, 70 microns, and these have been dubbed "70 micron dark regions." CfA astronomer Qizhou Zhang was a member of a team that used the ALMA millimeter array to study 70 micron dark regions where young, high mass clumps were seen. The survey looked at a dozen IRDCs and first-look results reported that about half of the cores were smaller than about one solar-mass - and no cores were found larger than thirty solar-masses.

The IRDC G023.477+0.114, one of the twelve clouds in the survey, lies about sixteen thousand light-years away. It contains about one thousand solar-masses of material, and was selected because it had been regarded as a massive, starless cloud with the potential of forming high-mass stars. Spectroscopic measurements found that its dense gas was not turbulent, implying that turbulence (at least in this case) was not a factor in supporting the cores against collapse into stars. A thorough analysis of the new ALMA measurements, with spatial resolutions of about one tenth of a light-year, found eleven cores in the structure, and measured their masses as ranging from about one to twenty solar-masses. The observations also discovered four collimated outflows in the molecular emission line images, a sign that star formation has already begun, even at this early stage of development. Thus this IRDC can no longer be considered pre-stellar in character. The astronomers tested the two main theoretical scenarios for star formation against the observed properties of the eleven cores and found examples that were consistent with one or even both alternatives. The scientists argue that this sample size is still too small to reach any clear conclusions, but that the analysis of the cores in the full sample of IRDCs in the 70 micron dark study will eventually provide sufficient statistics to constrain the models.