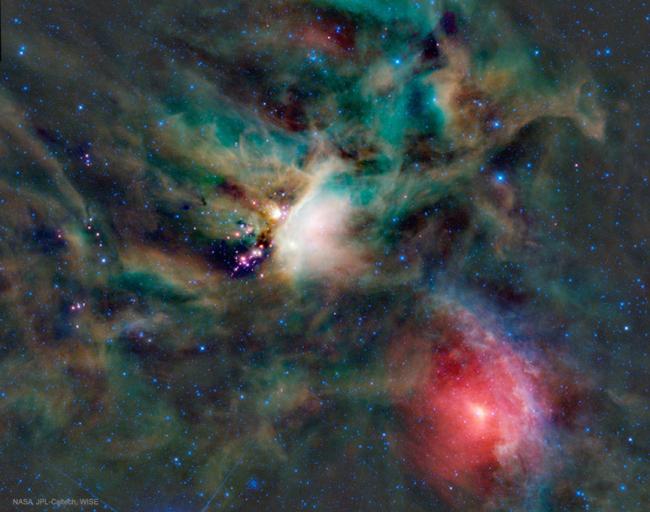 A false-color image of star formation in the Rho Ophicucus giant molecular cloud as seen in the infrared by Wide-field Infrared Survey Explorer; the field-of-view spans about 14 light-years. Star formation is an intricate process involving many physical effects working together over a wide range of distance and temporal scales. Astronomers have developed the first successful giant molecular cloud simulation that traces the formation of individual stars over about eight million years and across multiple scales. It includes feedback mechanisms like jets, radiation, winds, and supernovae, and builds on earlier codes that included gravity, magnetic fields, and turbulence.

Star formation is arguably the most important process in the universe. Over their lifetimes, and then with their deaths, stars produce of all the chemical elements except for hydrogen and helium (produced in the big bang). In their youths star nurture the birth of planets and smaller bodies, and their demise results in supernovae, super-dense bodies like black holes, neutron stars or white dwarfs, and nebulae. Stars radiate their copious energy into the cosmos at wavelengths across the spectrum, warming the surfaces of planets, facilitating interstellar chemistry, and lighting up galaxies in all cosmic epochs. Star formation, by determining the locations, abundances, and relative masses of stars, regulates the palette of the sky and its rainbow of attributes.

Stars in the universe form, at least in our current epoch, when massive clouds with molecular gas collapse via gravity. But in the Milky Way this process is very inefficient; only about 1% of the available material ends up in a star. Astronomers think one reason is that star-forming cores are inhibited from developing by the outward pressure of turbulent supersonic gas motions (that is, gas moving faster than the speed of sound) and from outflows from supernovae, winds or jets produced by an earlier generation of stars. At least this is the picture for low-mass stars. Observations of young massive stars, however, sometimes suggest the opposite conclusion, that high mass stars form precisely where gas turbulence inhibits low mass stars from developing until enough mass accumulates for massive stars to be born. The many complex, interwoven physical processes involved leave many puzzles, including why stars form with low efficiency, why they have the particular masses that they do, why and how they form in clusters, and why some are in multiple systems while and others are not.

Computer simulations can provide fundamental insights into these questions. Astronomers have been at work for decades refining their codes and comparing them to observations. The task is daunting: not only are there many different physical processes at work, they affect one another, while critical steps occur across spatial scales from hundreds of light-years to the immediate vicinity of the embryonic star, and timescales from millions of years to days. A realistic simulation of star formation must somehow accurately account for all of this.

CfA astronomer Anna Rosen and her colleagues have developed the first giant molecular cloud simulation that follows the formation of individual stars and their feedback from jets, radiation, winds, and supernovae. It builds on their earlier codes that included gravity, magnetic fields, and turbulence, but which gave unrealistically high star formation efficiencies and produced an excess of massive stars. The new numeric simulation traces star formation in a cloud for about eight million years, using about 160 million steps, some separated by times of only a day. It evades the defects of earlier codes yet retains overall consistency with their more accurate results. It also reaches significant conclusions, among them that protostellar jets are a dominant source of feedback that inhibits stellar birth -- supernovae feedback occurs too late in the birth cycle to seriously disrupt the development of other stars in the nursery. This landmark achievement is the first numerical simulation of any kind to model the formation of a stellar cluster while tracking the formation, accretion, motion, evolution, and feedback of individual stars and protostars, with feedback from all major channels: protostellar jets, stellar winds, stellar radiation, and core-collapse supernovae.