Measuring the Shape of the Milky Way's Black Hole 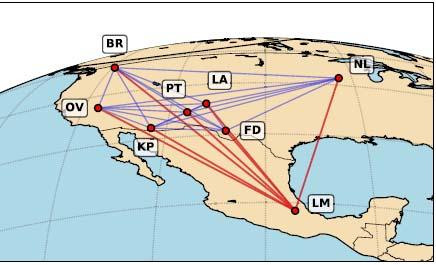 This figure shows the locations of the radio telescopes linked together to observe the supermassive black hole at the center of our Milky Way.

At the heart of our galaxy's center is SagA*, a supermassive black hole containing about four million solar-masses of material. SgrA* is relatively faint, unlike the supermassive black holes in some other galaxies. This is probably because, unlike its active cousins, it is not aggressively accreting material and so is neither heating up its environment nor ejecting particularly intense jets of fast-moving charged particles. Of course, it is also faint because it is located about twenty-five thousand light years from Earth and because it is shrouded in absorbing, intervening dust. Nevertheless, radiation at radio, submillimeter, infrared and X-rays can penetrate the veiling material. As the closest super massive black hole to Earth, SgA* is a template for astronomers actively studying black holes, offering the best views of the physical properties and environments. The radio emission in particular is thought to come from material falling onto a disk around the black hole and heating up electrons, and from ejected material both within the jet itself and its nozzle.

One of the most exciting new projects studying SgrA* uses Very Long Baseline Interferometry (VLBI) techniques, which links an array of widely-spaced radio telescopes to obtain very high spatial resolutions. CfA astronomers Michael Johnson, Shep Doeleman, Lindy Blackburn, Mark Reid, Andrew Chael, Katherine Rosenfeld, Hotaka Shiokawa, and Laura Vertatschitsch and their colleagues used a VLBI network to detect SgrA* in millimeter wavelengths. They were successfully able to model its size, thanks to the inclusion in the array for the first time of the Large Millimeter Telescope Alfonso Serrano in Mexico.

The scientists conclude that the radio emission comes from a region only 1.2 astronomical units in diameter (one AU is approximatley the average distance of the Earth from the Sun). The black hole's radius of no return itself (its Schwarzchild radius) is only about ten times smaller. They estimate that the emission they see comes from hot electrons in the inner parts of the accretion flow, but there are many details to sort out and additional observations are needed to eliminate other possibilities. Nevertheless, this first result is a remarkable achievement in probing the nature of supermassive black holes, their environments, and the processes taking place around them.