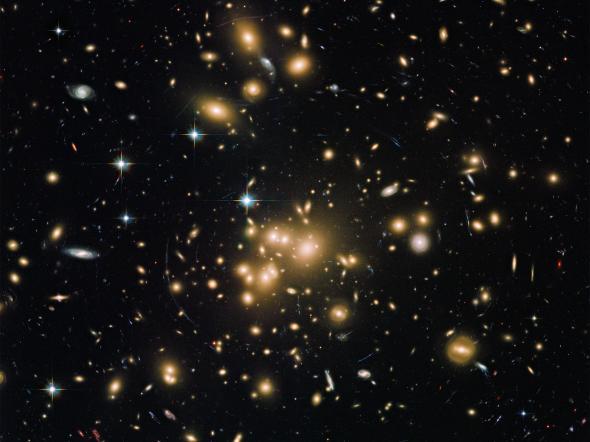 A Hubble image of the galaxy cluster Abell 1689, which acts as a lens to focus the light from much more distant galaxies, including some very dusty star-forming galaxies in the early universe (seen as the nearly point-like blue smudges in this image). A submillimeter study of a different massive dusty galaxy in the early universe uses carbon monoxide gas to characterize the interstellar medium and determine the mass and star-formation rate.

Searches for the most distant galaxies have now probed earlier than the first billion years in the history of the universe, early enough to start seeing the primary effects of the first stars: the reionization of neutral atoms. Astronomers want to understand how galaxies formed and evolved in this period, the timescale over which this reionization took place, the nature of the objects that provided the ionizing photons, and the scenarios in which galaxies and their interstellar medium (ISM) become enriched with atoms made in stellar furnaces. Although galaxies from this era are currently being discovered in deep optical and near-infrared surveys, most of them are low-mass galaxies, very faint, and the enrichment process is difficult to study. More luminous, massive star-forming galaxies are thought to be present and to play a major role in reionization, but because these large objects are difficult to assemble so early in cosmic time there are not many of them.

Massive star-forming galaxies that contain dust emit strongly radiation at submillimeter wavelengths and these objects can be find using submillimeter telescopes. They therefore offer the opportunity to study extreme cases of metal/dust enrichment of the ISM early in the era of reionization. CfA astronomers Matt Ashby and Chris Hayward were members of a large team using the South Pole Telescope to detect a set of these dusty galaxies. They determined their distances using the ALMA telescopes by looking at the redshifted wavelength of carbon monoxide molecule in their ISM. The farthest known dusty galaxy was detected in this way, and subsequent observations of it with other facilities confirmed its cosmological distance. The scientists constrained the properties of the object by modeling the observed continuum and spectral lines, and found that the object has a mass in gas of about 330 billion solar-masses; for comparison, the estimated gas mass of the Milky Way is about five billion solar-masses (most of its mass is in stars). The dusty galaxy is forming new stars at an estimated rate of several thousand per year - although with the assumption that the process is similar to what is seen in nearby galaxies. This rare and distant object offers one of the best probes so far into the activity in galaxies when the universe was very young.