The Puzzling Detection of X-Rays from Pluto 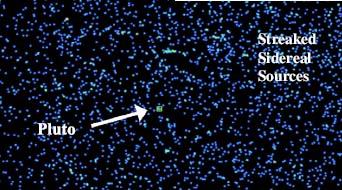 A Chandra-X-ray Observatory image of Pluto (and its surroundings). The image is a composite of multiple snapshots shifted and added to keep Pluto as a single point to maximize its detection, but leaving some other objects as streaks. Astronomers were surprised and puzzled to find that the X-ray emission is as strong as that coming from solar system objects with much more substantial atmospheres.

Pluto is the largest known body belonging to the Kuiper Belt, an orbiting disk of small objects that extends roughly from the orbit of Neptune to fifty AU from the Sun (one AU is the average distance of the Earth from the Sun). Pluto is known to have an atmosphere which changes size and density with its seasons, and preliminary results from the New Horizons flyby revealed that the atmosphere is primarily composed of nitrogen. Pluto, like all solar system objects, is immersed in the interplanetary solar wind, and the way it interacts with the wind depends on the properties of its atmosphere. Most models of Pluto’s atmosphere before the flyby expected it to be quite extended. When the solar wind interacts with neutral gas like nitrogen it is expected to induce X-ray emission; such emission is seen from other solar system bodies, like comets, Venus and Mars. Astronomers therefore decided to look for analogous emission from Pluto’s atmosphere using the Chandra X-ray Observatory.

CfA astronomer Scott Wolk was a member of a team that undertook the Chandra measurements. From its close flyby, New Horizons found that Pluto's atmosphere was not as extended as had been expected with an escape rate of the gas into space that is hundreds of times smaller than expected. But, to the surprise of the team, the X-ray emission was strong anyway, noticeably stronger than would have been expected for the smaller atmosphere. X-rays from other solar system objects arise from strong aurorae, for example, or the scattering of solar x-rays from small dust grains composed of carbon, nitrogen, and oxygen. Pluto's X-rays, although relatively strong, are unlike these in their energy distribution. The cause of the X-ray emission remains mysterious, but the astronomers speculate that it could be due to some process(es) that focus the solar wind near Pluto to enhance the effect of its modest atmosphere.