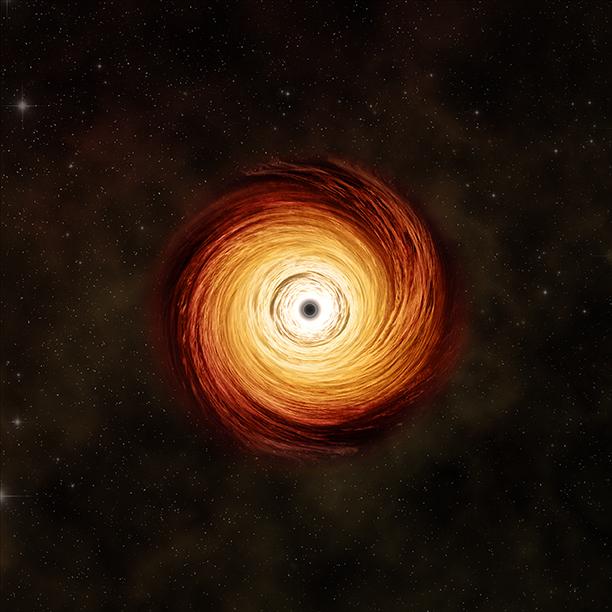 Scientists at the Center for Astrophysics | Harvard & Smithsonian, and the Black Hole Initiative (BHI), have shed light on how black holes grow over time by developing a new model to predict if growth by accretion or by mergers is dominant, according to the results of a study presented today at the virtual 236th meeting of the American Astronomical Society and published simultaneously in The Astrophysical Journal.

Dr. Avi Loeb, Frank B. Baird Jr. Professor of Science at Harvard, and Dr. Fabio Pacucci, astrophysicist and BHI & Clay Fellow at CfA, have developed a theoretical model to determine the main channel for the growth of black holes. The model is valid from the local universe up to redshift 10, or roughly from the present day to about 13 billion years ago.

"Black holes can grow in two ways. They can accrete mass from the space around them or they can merge with each other, forming one more massive black hole,” said Pacucci. "We currently believe that the first black holes started to form approximately with the first population of stars, over 13.5 billion years ago." The question is: how did these "seeds" grow to form the very broad population of black holes that scientists now detect in the universe, from small ones up to the very large monsters that we observe shining from the other side of the cosmos? Loeb added, "We can constrain their history not just by detecting light but also through gravitational waves, the ripples in spacetime that their mergers produce."

According to previous studies, black holes that grow mostly by accretion are predicted to rotate much faster on their axes than those that grow mostly via mergers. "As the rate of rotation, or spin, fundamentally affects the way the region around a black hole shines, studying the main growth modality of black holes helps to provide us with a clearer picture of how bright these sources can be. We already know that matter falls toward the event horizon of black holes and, as it speeds up, it also heats up, and this gas starts to emit radiation," said Pacucci. "The more matter a black hole accretes, the brighter it is going to be; that’s why we're able to observe far-away objects like supermassive black holes. They're one billion times more massive than the sun, and they are able to emit enormous amounts of radiation so we can observe them from even billions of light years' distance." Loeb further stated that even if their environment is gas free, "black holes can grow in mass through galaxy mergers."

Black holes, and their growth, appear to play a key role in the evolution of galaxies. "We believe that every galaxy contains a massive black hole at its center, which regulates the formation of stars in their host,” said Pacucci. "Understanding how black holes formed, grew and co-evolved with galaxies is fundamental to our understanding and knowledge of the universe, and with this study, we have one more piece of the puzzle."

The next generation of space-based X-ray and gravitational wave observatories, including Lynx, Athena, AXIS and LISA—the Laser Interferometer Space Antenna—will be able to detect most of the black holes investigated in this work, up to the very early universe. Future observations will test the new model and ultimately expand the scientific knowledge of the population of black holes across cosmic time.

"We already tested our model with data from close-by black holes, obtaining very encouraging results," said Pacucci. "Our goal in this study was to provide the scientific community with a theory that describes how black holes may have grown during the evolution of the universe. This will inform decisions regarding observational strategies with future space telescopes, as well as lay the basis for models that describe other aspects of the evolution of the universe."

Loeb, too, is optimistic about the future, "We find surprisingly large 'babies' in the cosmic nurseries of black holes, but over the coming decades we will figure out who their parents were."

Loeb was nominated to the President’s Council of Advisors on Science and Technology in April 2020.