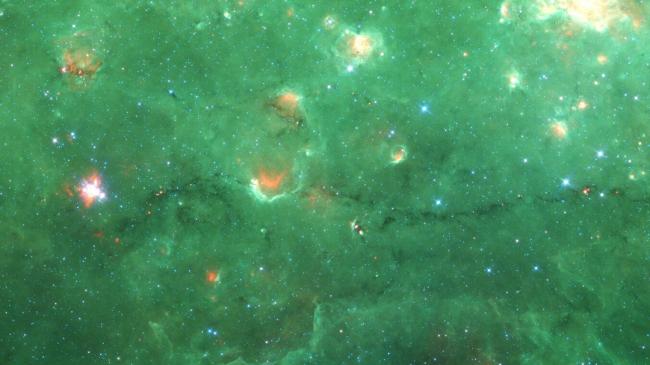 The dark filament "Nessie," as seen in the infrared with the IRAC camera on Spitzer. Nessie, a cloud of cold gas and dust, is a "bone" tracing the Milky Way's spiral arm structure. Astronomers have used SOFIA, NASA's Stratospheric Observatory for Infrared Astronomy, to measure the magnetic field along the bone G47.06+0.26 via its infrared polarization.

Star formation in the Milky Way primarily occurs in long, dense filaments of gas and dust that stretch along the spiral arms. Dubbed "bones" because they delineate the galaxy's densest skeletal spiral structures, these filaments are characterized by being at least fifty times longer than they are wide and having coherent internal motions along their lengths. While most of the key physical properties of these bones are known, what we know of their magnetic field properties is generally unconstrained. These fields can play a critical role either in supporting the gas and dust against gravitational collapse into new stars, or alternatively, in assisting the flow of mass along the bone into cores making new stars.

Magnetic fields are notoriously difficult to measure in space. The most common method relies on the emission from non-spherical dust grains that align their short axes with the direction of the field, resulting in infrared radiation that is preferentially polarized perpendicular to the field. Measuring this faint polarization signal, and inferring the field strength and direction, has only recently become easier to do with the HAWC+ instrument on SOFIA, NASA’s Stratospheric Observatory for Infrared Astronomy, and its 2.5-m telescope. SOFIA flies as high as 45,000 feet, above most of the atmospheric water vapor that absorbs far infrared infrared signals from space.

CfA astronomers Ian Stephens, Phil Myers, Catherine Zucker, and Howard Smith led a team that used HAWC+ polarization to map the detailed magnetic field along the bone G47.06+0.26. This filament is about 190 light-years long, 5 light-years across, and has a mass of 28,000 solar-masses with a typical dust temperature of 18 kelvin. The IRAC camera on Spitzer had previously mapped the bone to identify the regions of young star formation along its length. The astronomers determined where along the bone the magnetic field is capable of supporting the gas against collapse into stars, and those regions where it is too weak. They also mapped low density regions where the field is more complex in shape. G47.06+0.26 is just the first object studied in a larger program to map the magnetic fields in ten of the eighteen known Milky Way bones. Once an analysis of this larger statistical sample has been completed, the scientists expect to be able to quantify more precisely how the strength and orientation of fields influence the evolution of the bones and their pockets of star formation.