The latest version of WorldWide Telescope, WWT 2022, has launched, revealing new data and capabilities and providing an even more powerful astronomy visualization toolkit. 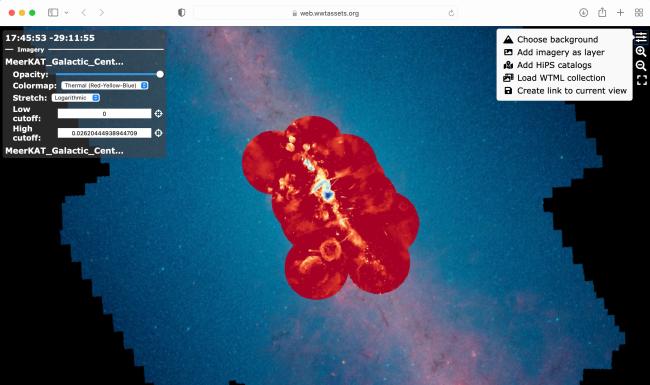 WWT isn't a physical telescope, but rather a suite of free and open-source software that integrates data and images from dozens of astronomical observatories and surveys, making it easy to explore the universe on a range of platforms including mobile phones, desktop computers, and state-of-the-art planetariums. With WWT, astronomy enthusiasts can enjoy stunning astronomical images like these astrophotographs by Gary Plummer, and researchers can explore and share rich datasets like this map of the Milky Way's center from the MeerKAT radio telescope. And the newest edition of WWT brings users a host of new features.

"WWT 2022 wraps up several years' worth of improvements to all aspects of WorldWide Telescope," says Peter K. G. Williams, a scientist at the Center for Astrophysics | Harvard & Smithsonian who also serves as director of the WWT and an AAS innovation scientist. "We more than doubled the size of WWT's built-in datasets, integrating thousands of beautiful new astronomy images. But we also know there's no dataset like your own, so we've expanded our tools to make it even easier for users to import their own data — whether you're an amateur with your first astrophotograph or a researcher who wants to explore a gigapixel mosaic."

The new features introduced in WWT 2022 include a "research app" for astronomy professionals that seamlessly integrates data analysis and visualization in the JupyterLab computing environment; support and tools to convert a wider variety of images and datasets into WWT's formats; and new images and data, ranging from a 7-meter-per-pixel map of the Moon captured by the SELENE "Kaguya" Terrain Camera to MeerKAT's stunning recent radio images of the heart of our galaxy. A new sharing app is also available for users to create interactive figures that can be put into iPosters or journal articles, or even to share interactive guided tours (like this Sky & Telescope tour of bright stars in the night sky).

"When the AAS assumed leadership of WWT from Microsoft in 2016, we were excited about the potential for this software to provide the community with new ways to visualize astronomical data," says Julie Steffen, AAS Chief Publishing Officer. "The dramatic expansion of WWT's capabilities in the last few years has made this tool even more valuable for astronomical researchers, while simultaneously providing an easy way to share the astronomical images, in context, with the broader public. In this way, WWT aligns well with the AAS's mission to enhance and share scientific humanity's scientific understanding of the universe."

To get started with WWT, astronomy researchers can dive into tutorial notebooks that demonstrate the usage of the new WWT JupyterLab app. Educators may wish to explore WWT educational materials and lesson plans or create their own guided tours starting from an ample library of built-in tours. And anyone can explore WWT's rich imagery from their web browser or from the recently updated Windows client.

The new WWT 2022 also provides a range of programming interfaces that allow users to create interactive, WWT-powered applications in the Python and TypeScript programming languages. "One of the best things about WWT is that it does a ton of the hard work for you. You don't need to have an army of developers to build something really cool," Williams points out. "There are uses for everyone — whether you're a professional or an amateur, a researcher or an educator, WWT 2022 provides a compelling new way to explore and share the universe."

AAS WorldWide Telescope (WWT) is a free, open-source tool for visually exploring humanity's scientific understanding of the universe. WWT is a .NET Foundation project. Work on WWT has been supported by the American Astronomical Society, the US National Science Foundation (grants 1550701, 1642446, 2004840), the Gordon and Betty Moore Foundation, and Microsoft.

About the American Astronomical Society

The American Astronomical Society (AAS), established in 1899, is a major international organization of professional astronomers, astronomy educators, and amateur astronomers. Its membership of approximately 8,000 also includes physicists, geologists, engineers, and others whose interests lie within the broad spectrum of subjects now comprising the astronomical sciences. The mission of the AAS is to enhance and share humanity's scientific understanding of the universe as a diverse and inclusive astronomical community, which it achieves through publishing, meetings, science advocacy, education and outreach, and training and professional development.

To Navigate the Heavens, Take a Seat

Science Education Department
Understanding basic scientific concepts is essential for an informed public in a democratic society, but many scientific misconceptions are common. To complicate matters, it’s often difficult for educators to assess conceptual understanding among their students. For that reason, science education researchers at the Center for Astrophysics | Harvard & Smithsonian have developed Misconception-Oriented Standards-based Assessment Resources for Teachers (MOSART), a suite of assessment instruments for use in the classroom.
1

Radio and Geoastronomy
The WorldWide Telescope (WWT) is a free, open-source tool for exploring our knowledge of the universe. It provides planetarium-like views of the sky, as well as dynamic images of planets and other astronomical objects. The project enables users to incorporate images and video into scripts for custom “tours”, for use in classrooms, planetariums, museums, and other multimedia displays. WWT is a project of the American Astronomical Society (AAS), with scientific consultants from universities around the world, including the Center for Astrophysics | Harvard & Smithsonian. The WWT Ambassadors are scientists and science educators at CfA who use the WWT in public science outreach and education. WWT is both available as a web browser application and a desktop program for Windows computers.

Science Education Department
Young people are generally interested in science across demographics, but for many — particularly girls and students of color — that interest doesn’t lead to subsequent engagement in STEM (science, technology, engineering, and mathematics) fields. The Youth Astronomy Network (YouthAstroNet) is a program of the Science Education Department of the Center for Astrophysics | Harvard & Smithsonian designed to help middle school-aged students identify as people capable of doing real science. Young people participating in YouthAstroNet use the CfA’s MicroObservatory telescopes to obtain real astronomical data, and connect with scientists and educators through a dedicated online community.
4

Science Education Department
For a number of years, many universities have offered massive open online courses (MOOCs) in addition to traditional in-person classes. MOOCs are designed for much larger numbers of students than normal online classes and encourage students to enroll from outside the university. However, little research exists on how MOOCs compare with ordinary classes in terms of student experience and performance. One major issue is that large numbers of students who start these courses do not complete them. To better understand the reasons behind the high attrition rates, the Science Education Department (SED) of the Center for Astrophysics | Harvard & Smithsonian is engaged in two large-scale studies of two MOOCs offered by Harvard University.

Science Education Department
The United States consistently has too few science, technology, engineering, and mathematics (STEM) professionals to support the present and future American high-tech economy. The Science Education Department (SED) of the Center for Astrophysics | Harvard & Smithsonian has conducted a set of large studies, collectively named “Persistence in STEM”, to identify the factors affecting students’ interest in science and related fields. Based on survey responses from thousands of students in many colleges and universities across the United States, the “Persistence in STEM” studies investigate both what encourages and discourages potential STEM majors and professionals.