The Intergalactic Medium in the Young Universe 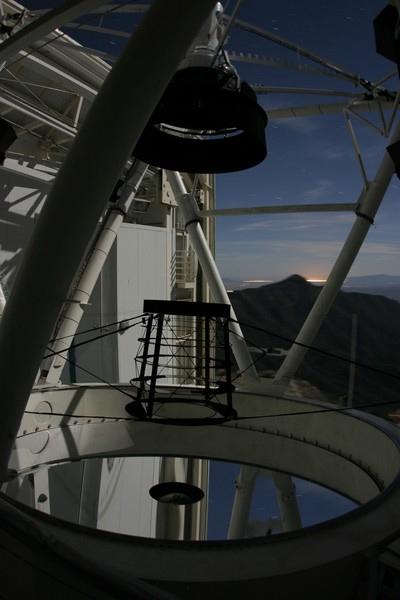 A picture of the 6.5-meter MMT primary mirror. The MMT was used to study the afterglow of a gamma-ray burst, and to measure for the first time the presence of neutral material in clouds of gas in the early universe.

In its earliest years, the universe was so hot that electrons and protons could not bind together in neutral atoms: all of the gas in the cosmos was ionized. Then, after 380,000 years of expansion, the universe cooled enough for hydrogen atoms and some helium (about 25%) to form. Much later in cosmic history -- the precise dating is an active area of current research but perhaps after a few hundred million years -- the first generation of stars emerged from the vast expanses of atomic gas, and these stars emitted enough strong ultraviolet light to re-ionize the neutral hydrogen in their vicinity. As the universe continued to expand and evolve, newer generations of stars continued to re-ionize the hydrogen until at some time most gas between galaxies (the intergalactic medium) was ionized once again. The epoch of re-ionization is an important diagnostic tool because it traces when the first generations of stars were being made, and it provides crucial details about the early evolution of the universe.

Searching for signs of ionized hydrogen from more than ten billions years ago is not a simple task. One method takes advantage of the stupendous luminosities of distant quasars, galaxies dominated by supermassive black holes actively accreting material and shining brightly. If clouds of neutral hydrogen lie between us and a quasar, astronomers can detect them because they absorb the quasar's light at characteristic wavelengths. Indeed, the first detection of these clouds was made in the 1960's (although from quasars that are relatively close to us). CfA astronomers Ryan Chornock, Edo Berger, Ragnhild Lunnan, Maria Drout, Wen-Fai Fong, and Tanmoy Laskar, and their colleagues have pioneered a new technique to study reionization: using the light emitted in the afterglow of a gamma-ray burst (GRB) to probe the intervening gas. GRBs are the brightest events in the known universe, and result from especially spectacular supernovae, the deaths of massive stars. They occur about once a day, randomly, around the sky, with most of them shining only for a few minutes -- but, because they are so bright, they can be seen even when they are very, very far away. After the blasts dies away, a faint afterglow remains, and when a GRB is spotted in time, follow-up observations of its afterglow can be made. In this new study, the astronomers were able to use the afterglow of a GRB to probe the neutral intergalactic medium.

The GRB in this study went off last June 6 and the blast lasted for 277 seconds; it was discovered with NASA's Swift satellite. The scientists began observing its afterglow six hours and fifty nine minutes later using the joint Smithsonian-Arizona MMT Observatory. They discovered from the optical spectrum (that is, from its redshift and corresponding distance) that the burst went off when the universe was about 970 million years old. They also found in the spectrum absorption features signaling the presence of some distant clouds of neutral gas between us and the burst. The results are significant because they mark the first time that the afterglow from GRBs has been used to probe the gas at cosmological distances, and support earlier conclusions that by this period in the evolution of the cosmos most (but not all) material had been ionized.

"GRB 130606A as a Probe of the Intergalactic Medium and the Interstellar Medium in a Star-Forming Galaxy in the First Gyr After the Big Bang," Ryan Chornock, Edo Berger, Derek B. Fox, Ragnhild Lunnan, Maria R. Drout, Wen-fai Fong, Tanmoy Laskar, and Katherine C. Roth, ApJ 774, 26, 2013.