Astronomy from the Summit of Greenland 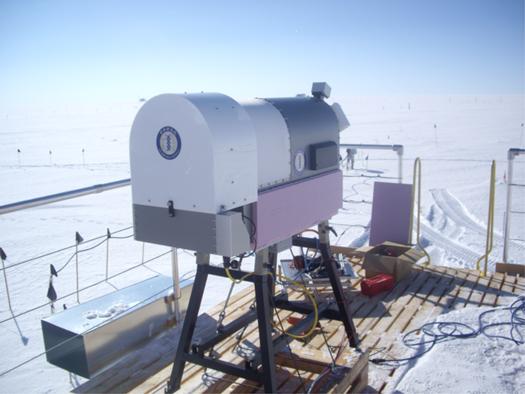 A photo of the atmospheric sensor instrument located on the roof of the Mobile Science Facility at the Greenland Summit Camp. Astronomers have concluded that the site is excellent and a valuable addition to the submillimeter very long baseline interferometer program.

An image of astronomical object, like other images, can be "worth 1000 words." Astronomers therefore use increasingly sophisticated technologies to obtain higher resolution images. At submillimeter wavelengths, astronomers in the past decades have successfully designed very long baseline interferometers (VLBI). The general techniques resemble those used at radio wavelengths and take advantage of an array of telescopes spaced far apart, but at these shorter millimeter wavelengths the images have proportionately higher spatial resolutions, as much as a factor of ten better. One particularly demanding science project is the direct imaging of nearby supermassive black hole in our galaxy’s center, Sagittarius A* (Sgr A*).

CfA astronomer Scott Paine is a member of the Submillimeter Array, a joint enterprise between SAO and the Academia Sinica Institute of Astronomy and Astrophysics (ASIAA), in Taiwan. The two institutions have been looking for a site to locate a new millimeter telescope to emphasize VLBI observations of SgrA*. Scott and eight colleagues from ASIAA have just published an analysis of the scientific potential of a site in Greenland. The criteria were a site with very low water vapor in the atmosphere (water tends to absorb the submillimeter signal), a large distance from other telescopes in the world-wide array to maximize the resolution, overlapping sky coverage with the Atacama Large Millimeter/submillimeter Array in Chile so that the same objects can be seen, and general ease of access for staff.

A site that appears to satisfy all these requirements is the summit of the Greenland ice sheet, at an altitude of 3200m (10,500'). After three and one-half years of monitoring the atmospheric conditions here, the scientists have concluded that the location is excellent, with only about 10%-30% worse properties (the transmission of radiation) than the best site, the South Pole in winter, and maybe twice that in the summer. One major advantage of the site, in addition to its providing a very long separation from the other telescopes in the VLBI configuration, is that the weather is extremely stable for long times, allowing potential observations to last over one hundred hours, significantly longer than possible at the ALMA site. SAO and ASIAA plan to establish a facility there in the near future.