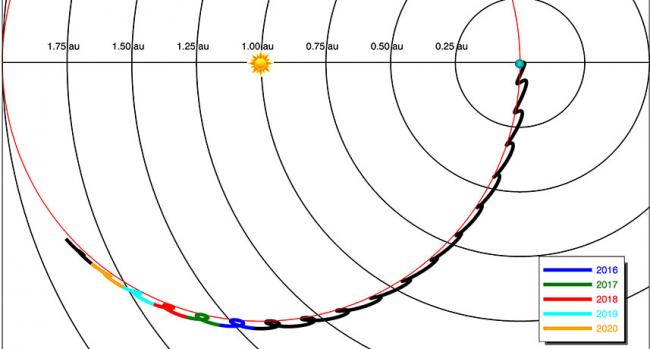 A diagram showing the orbit of the Spitzer Space Telescope around the Sun. Spitzer is now about 1.66 astronomical units from the Earth, and has been used in hundreds of parallax measurements of microlensing events that enable astronomers to fix the distances to the lensing objects - and hence to measure their masses. A new paper reports finding and characterizing a microlensed brown dwarf star binary pair.

Brown dwarfs are stars less massive than the sun and unable to burn hydrogen. They comprise (at least in mass) a bridge between planets and stars, and astronomers think that they form and evolve in ways different from either planets or stars. Gravitational microlensing is an excellent method for detecting them because it does not depend on their light, which is dim, but rather their mass. When the path of light from a star passes by a brown dwarf acting as a lens, it is magnified into a distorted image, like an object seen through the stem of a wineglass, allowing the detection and characterization of the lensing object. Thirty-two brown dwarfs have been detected by microlensing so far. Five are in isolation, but most are in binary systems, companions to faint M-dwarf stars. They provide important constraints on brown dwarf formation scenarios.

The critical parameter of a brown dwarf is its mass, but it is difficult to measure the mass of a lens using microlensing. Using this method, one measures the magnified and distorted stellar image as it changed in time (it varies as the Earth's vantage point moves), but the technique offers no handle on the distance, and the larger the distance, the larger is the mass needed to generate the same-sized distortion. Recognizing this problem, scientists had predicted that if it ever became possible to observe a microlensing flash from two well-separated vantage points, a parallax measurement (the apparent angular difference between the positions of the star as seen from the two separated sites) would determine the distance of the dark object. The Spitzer Space Telescope circles the Sun in an Earth-trailing orbit, and is currently 1.66 astronomical units away from Earth (one AU is the average distance of the Earth from the Sun). Spitzer is unique in this capability, and it has in fact been used successfully to measure the parallax distance for hundreds of microlensing events, thereby helping to determine the masses of the lenses.

CfA astronomers Jennifer Yee and In-Gu Shin were members of a large team of microlensing astronomers who used Spitzer together with ground-based telescopes to study an unusual microlensing event. The object, MOA-2016-BLG-231, is located 9400 light-years away in the disk of our galaxy. The shape of its distorted light curve reveals it probably to be a pair of brown dwarfs of masses approximately twenty-one and nine Jupiter-masses, respectively (the smaller one is right at the lower mass limit for being a brown dwarf rather than a giant planet). This is only the fifth brown dwarf binary system discovered in which both objects are brown dwarfs; improved statistics enable astronomers to address the formation mechanisms needed.