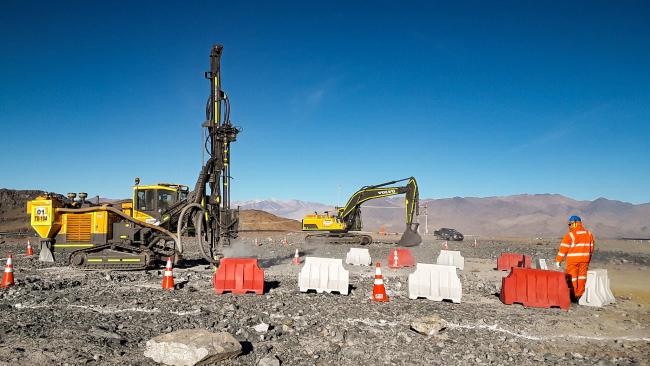 GMTO Corporation (GMTO) today announced the start of hard rock excavation for the Giant Magellan Telescope's massive concrete pier and the foundations for the telescope's enclosure on its site at Las Campanas Observatory in Chile. The work will be performed by Minería y Montajes Conpax (known as Conpax), a construction services company that has previously performed site work for other observatories in Chile. Using a combination of hydraulic drilling and hammering, the excavation work is expected to take about five months to complete. Excavation is a key step towards the construction of the GMT, which is expected to see first light as early as 2024.

The 25-meter diameter GMT, expected to have a final weight of about 1,600 metric tons, will comprise seven 8.4-meter mirrors supported by a steel telescope structure that will be seated on the concrete pier. It will be housed inside a rotating enclosure that will measure 65 meters (~22 stories) tall and 56 meters wide. As well as working on the enclosure and telescope pier foundations, Conpax will excavate a recess in the summit rock for the lower portion of the mirror coating chamber and foundations for a utility building and tunnel on the summit.

GMTO Project Manager, Dr. James Fanson, said, "With the start of construction of the permanent buildings on the site, the GMT is showing tangible progress towards completion. We are delighted that Conpax is carrying out this important work."

The most challenging part of their work on the summit will be to excavate the solid rock of the mountain top to a depth of 7 meters (23 feet) to hold the concrete for the telescope pier. Much of this work will be done with a hydraulic rock hammer and jack hammer to ensure that the integrity of the solid bedrock below the pier is undamaged. Dr. Fanson said, "In total, we expect to remove 5,000 cubic meters or 13,300 tons of rock from the mountain and will need 330 dump truck loads to remove it from the summit."

Las Campanas Observatory, located in the southern Atacama Desert of Chile and owned by the Carnegie Institution for Science, is one of the world's premier astronomical sites, known for its clear, dark skies and stable airflow, producing exceptionally sharp images. With its unique design, the GMT will produce images that are 10 times sharper than those from the Hubble Space Telescope in the infrared region of the spectrum and will be used by astronomers to study planets around other stars and to look back to the time when the first galaxies formed.

In the past year, the GMT project has cast the fifth primary mirror segment at the Richard F. Caris Mirror Lab at the University of Arizona, announced a new partner for the project with Arizona State University, and awarded design-build contracts for the telescope mount.

This release is being issued jointly with GMTO.

The 2018 Science Book describing GMT's strengths and its potential for scientific discovery was recently released and is available for download.

The Smithsonian Astrophysical Observatory (SAO) leads the team responsible for the spectrograph G-CLEF (GMTConsortium Large Earth Finder). G-CLEF, when mounted on the GMT, will significantly advance the detection and characterization of planets around other stars. It is designed to detect the presence of diatomic oxygen in the atmospheres of Earth-like planets orbiting nearby stars. Terrestrial O2 is produced by living organisms. The search for life on other planets is one of the key programs of the Harvard University Origins of Life Initiative, with senior members from both Harvard College Observatory and SAO. The GMT will also enable important progress in a broad range of other fields of astrophysics, including understanding how galaxies form and evolve, and advancing the exciting new field of gravitational wave astronomy.

The Harvard-Smithsonian Center for Astrophysics also participates in the GMT through active membership on the GMTO Board and the Science Advisory Committee, as well as leadership in technical design reviews. SAO scientists have also played a leading role in designing the mirror alignment system.