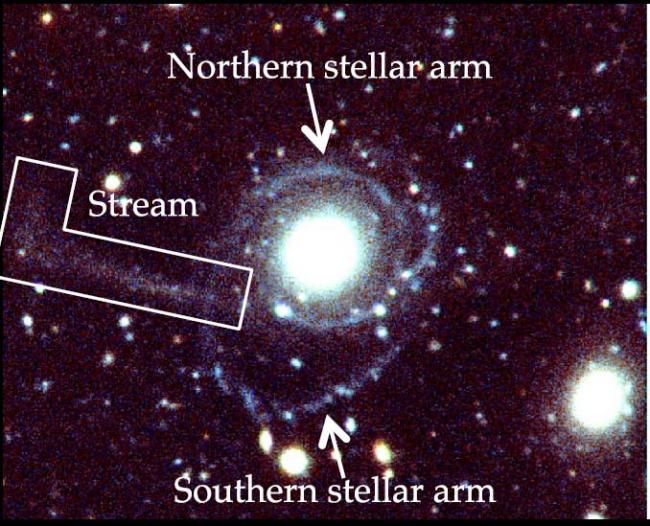 A deep optical image of the gas-rich galaxy GASS 3505 which in at radio wavelengths shows a ring of neutral hydrogen gas, probably a result of accretion (there is a faint streamer seen to the left in this image). Astronomers conclude that the star formation in this object is very weak, less than about 0.1 solar-masses per year.

Cold gas in the form of neutral hydrogen atoms provides the reservoir for star formation in galaxies from the distant to the nearby Universe. Understanding how it accretes onto galaxies is of crucial importance because fresh supplies of gas fuel the ongoing star-forming. In the most popular version, accretion onto the galaxy occurs along cosmic filaments, and at least in more massive galaxies is heated by shocks in the process; in smaller galaxies the infalling material stays relatively cool. Since galaxies in the early universe are smaller, it is thought that this cold process of growth is more typical for them as well.

Astronomers studying accretion need to look at nearby galaxies both because they are brighter and because they have distinguishable spatial features such as tails, bridges, ringlike structures, warped discs, or lopsidedness that could result from accumulating gas. The GALEX Arecibo SDSS Survey (GASS) is a multi-wavelength, deep survey designed specifically to search for galaxies rich in atomic hydrogen. CfA astronomer Sean Moran and five colleagues searched GASS to select one object, GASS 3505, that has nearly ten billion solar-masses of atomic hydrogen and a round, relatively unstructured appearance in the optical. The team followed up with deep radio maps of the hydrogen emission using the Jansky Very Large Array.

The astronomers found that the cold gas is distributed in a ring around the galaxy about one hundred and sixty thousand light-years in diameter, within which extremely inefficient star formation is happening (about ten times less than the Milky Way’s value). The ring, it turns out, is connected to a complex stream of material that is a signature for infall and accretion; the stream is a reminder of how important faint morphological features are in understanding a galaxy’s evolution. The scientists, among other analysis, perform computer simulations of a merger that helps to explain the activity of GASS 3505, with slight discrepancies identifying the possible presence of some additional activity still to be confirmed and identified. Future surveys with a new generation of radio telescopes will be able to study these gas rich systems at cosmological distances.