The Lifetimes of Massive Star-Forming Regions 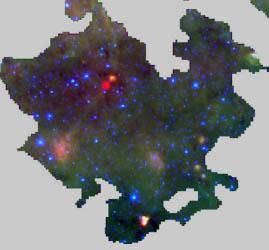 An image of a region with both star-forming cores (seen in the red) and starless clumps (the dark regions). Astronomers have combined statistical studies of these infrared data with submillimeter images to estimate the typical age of a massive star forming clump as about one million years. The red data are from Herschel 70 micron images, the green and blue are from Spitzer IRAC images at 8 and 4.5 microns.

Astronomers can roughly estimate how long it takes for a new star to form: it is the time it takes for material in a gas cloud to collapse in free-fall, and is set by the mass, the size of the cloud, and gravity. Although an approximation, this scenario of quick, dynamic star formation is consistent with many observations, especially of sources where new material can flow into the cloud, perhaps along filaments, to sustain steady activity. But this simple picture might not apply in the largest systems with star clusters and high-mass stars. Rather than a quick collapse, the process there might be inhibited by pressure, turbulence, or other activities that slow it down.

CfA astronomer Cara Battersby and two colleagues studied the formation, early evolution, and lifetimes of high-mass star-forming regions and their earliest evolutionary phases in dense, molecular regions. These clumps have densities of gas as high as ten million molecules per cubic centimeter (tens of thousands of times higher than typical in gas clouds); the dust associated with this gas blocks the external starlight, leaving the material very cold, only a few tens of degrees above absolute zero. The usual method for identifying these clumps is with submillimeter telescopes, which take images of the sky; automated algorithms can then process the images to identify and characterize cold clumps. The problem is that even a quiescent clump can contain subregions of activity that are not spotted with the relatively poor spatial resolutions of the submillimeter telescopes used to assemble catalogs of these regions.

Rather than rely on the submillimeter images of the entire clumps, the astronomers examined each of the multiple, individual pixels in each clump image and compared the results with data from infrared and far infrared. These infrared images sample hotter material, including that from small embedded sources that may have been overpowered in the larger image. The infrared signals the presence of star formation activity in the clump, and also characterizes the dust temperatures (which are slightly higher when such activity is present). The authors anchor their timeframe to sources called methanol masers, found in star forming regions, which last for about 35,000 years. These masers are seen in many of the dense clumps, and reasonable estimates of their properties constrain the ages of the clumps in which they are located. The statistics from all the submillimeter and infrared clumps then provides an estimate of the typical values of a clump lifetime. The astronomers find that clumps without any embedded stars last between about 0.2 and 1.7 million years, while those with stars last only about half that time. The times, in the star formation case, span a range from about 0.4 - 2.4 free-fall times, in good agreement with the models. The results also demonstrate that most high density gas is found in clumps lacking a high-mass star (however, there could be small, low-mass stars present).