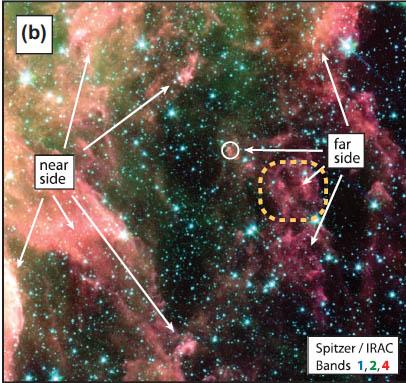 A false-color infrared image of nebulosity near the massive flaring star Eta Carinae. The small white circle highlights an "echo" - a bright cloudlet that has recently lit up as shocks from the eruption of the star (located off the top of the image) pass through. Astronomers date the eruption producing this bright cloudlet to the Great Eruption of 1837 and argue from the spectra that the flare was probably due to a triple-star merger event. Other figure labels relate to the model geometry and the IRAC camera filters.

The young star Eta Carinae shines prominently in the skies of the southern hemisphere. Although located relatively far away from Earth (about seven thousand light-years away, as compared with the average distance of naked-eye stars of about a thousand light-years), it can be seen easily by people in the southern hemisphere because it is fantastically bright -- about five million times more luminous than our Sun. Astronomers have suggested one reason it is so bright is because it is very massive – perhaps as much as 200 times more massive than our Sun, making it one of the most massive stars known. (Massive stars consume their hydrogen much more quickly than Sun-like stars and are hotter and brighter.)

Eta Carinae resides in a large molecular cloud (the Carina Nebula) surrounded by a double-lobed structure of gas and dust that probably resulted from prodigious mass ejections and intermittent winds from the star (or others nearby). Eta Carinae itself is known to be highly variable; John Herschel (the son of Astronomer Royal William Herschel) first called attention to this star and a particularly dramatic flaring event it underwent in 1837 dubbed "The Great Eruption." Scientists have debated whether the whole region is dominated by active star formation and/or whether a supernova may have gone off nearby, all of which would contribute to the variability and complex structures. They have also suggested that the Great Eruption was due to the merger of a pair of binary stars, and that analogous events may power the extreme events seen in other galaxies.

As radiation and shocks from stellar flares propagate outward through the interstellar medium they encounter wisps and cloudlets of material that then light up – "echos" of the flaring events themselves. CfA astronomer David James was a member of a team that has been studying light "echoes" from Eta Carinae. The team has previously published its results on echoes seen since 2003, but now reports finding a new echo from careful subtraction of images taken at different epochs. The new echo is somewhat brighter than others they have seen, and is distinct in its character: it fades away more slowly and shows different spectral characteristics.

The scientists analyzed images and spectra of the nebula taken at optical wavelengths with the CTIO Blanco and Magellan Baade and Clay telescopes, and in the infrared with the IRAC camera onboard Spitzer. The spectra reveal for the first time very high expansions speeds in the gas, up to fifty million miles an hour, and evidence of a two-phase eruption which the scientists can trace back to the Great Eruption. They interpret the results to argue for a triple-star system that led to the merger, kicking out the original primary star. (They also detect evidence for prior eruption activity - as much as 600 years before the Great Eruption.) The new scenario differs in several key ways from earlier suggestions, and can more easily explain a wider variety of observations. There is a record of observation of Eta Carinae dating back to John Herschel, with many detailed results over the past decades. If in fact Eta Carinae’s eruption really was a triplet merger of this sort, these data offer new insights into how very high mass stars form and evolve in their environments.

A Cluster of X-Ray Binary Stars Near the Galaxy's Center

The Mass of the Milky Way

The Origin of Binary Stars