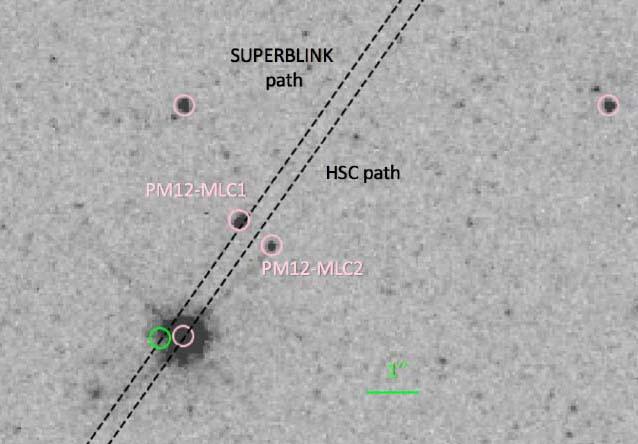 A Hubble image of the white dwarf star PM I12506+4110E (the bright object, seen in black in this negative print) and its field which includes two distant stars PM12-MLC1&2. The dotted lines show two possible paths the white dwarf will follow, with one of them passing a star close enough to result in a gravitational lensing event. Astronomers have proposed using such events to determine the masses of compact objects like this white dwarf. (Credit: )

Measuring the mass of a celestial body is one of the most challenging tasks in observational astronomy. The most successful method uses binary systems because the orbital parameters of the system depend on the two masses. In the case of black holes, neutron stars, and white dwarfs, the end states of stellar evolution, many are isolated objects, and most of them are also very faint. As a result, astronomers still do not know the distribution of their masses. They are of great interest, however, because they participate in dramatic events like the accretion of material and emission of energetic radiation, or in mergers that can result in gravitational waves, gamma-ray bursts, or Type Ia supernovae, all of which depend on an object's mass.

CfA astronomers Alexander Harding, Rosanne Di Stefano, and Claire Baker and three colleagues propose a new method for determining the masses of isolated compact objects: gravitational lensing. The path of a light beam will be bent by the presence of mass, an effect calculated by General Relativity. A massive body will act like a lens to distort the image of an object seen behind it when the two are close to being aligned along our line-of-sight, and the specifics of the image distortions will depend on the body's mass. The astronomers describe the prospects for predicting lensing events generated by nearby compact objects as their motions take them across the field of background stars.

The team estimates that the nearby population of compact objects contains about 250 neutron stars, 5 black holes, and about 35,000 white dwarf stars suitable for this study. Knowing the general motions of the white dwarfs across the sky, they obtain a statistical estimate of about 30-50 lensing events per decade that could be spotted by Hubble, ESA's Gaia mission, or NASA's new JWST telescope. The next step in this effort is to use ongoing stellar surveys like that of Gaia to refine the bodies' positions and motions to be able to predict specifically which objects to monitor for lensing.