Matter under extremes of temperature, magnetic field, and density can behave in surprising  ways. The environments around stars, black holes, and other astronomical objects regularly produce violent behaviors, including jets of fast-moving matter, powerful outflows of particles, and shock waves. Extreme phenomena of this sort are responsible for everything from auroras on Earth to the formation of new stars in the wake of a supernova explosion. Outflows, shocks, and jets occur in a wide variety of astronomical systems, but many of the rules governing them are the same.

Center for Astrophysics | Harvard & Smithsonian scientists study the extreme phenomena of shocks, jets, and outflows in many ways:

The Magnetic and Gravitational Dance of Particles

High temperatures tend to strip electrons from their atoms, turning gas into plasma: a fluid of electrically-charged particles. These particles swirl around in magnetic fields, which can accelerate them to very high energies. Charged particles also generate magnetic fields, which means extreme astronomical environments are a complicated tangle of magnetism, gravity, and plasmas. The study of these systems is called “magnetohydrodynamics”.

Dramatic magnetic environments are produced in many astronomical systems, from newborn stars to the supermassive black holes at the centers of galaxies. As wildly different as these systems are on the surface, they all involve plasmas being driven by magnetic fields. For that reason, they produce many similar effects: 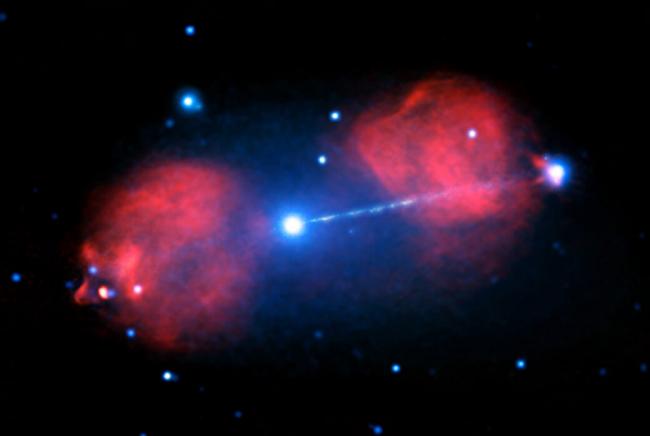 The supermassive black hole at the center of the galaxy Pictor A sends huge jets of matter into intergalactic space at near light-speed. This image shows the jets in X-ray (blue color) and radio (red) light.

Shock waves form when particles are moving faster than the speed of sound in that environment, thanks to something driving them at supersonic speeds. Bow shocks and other shock fronts happen where those supersonic particles are suddenly forced to slow down.

Though they’re definitely extreme phenomena, shocks are also very common. In addition to bow shocks produced by planets like Earth and Jupiter, astronomers have observed shocks from fast-moving stars plowing through interstellar gas, and shock waves from colliding galaxy clusters. On a smaller scale, shock waves driven by solar storms can endanger satellites and astronauts.

When shocks compress interstellar gas, they can spur the birth of new stars. That means the death of massive stars in supernovas can lead to the creation of the next generation. Since star formation itself produces outflows and shocks, in some instances star birth is a feedback process. This is one reason why many stars form in clusters at the same time. Astronomers study many different ways shocks can give rise to star formation, which include jets from supermassive black holes.