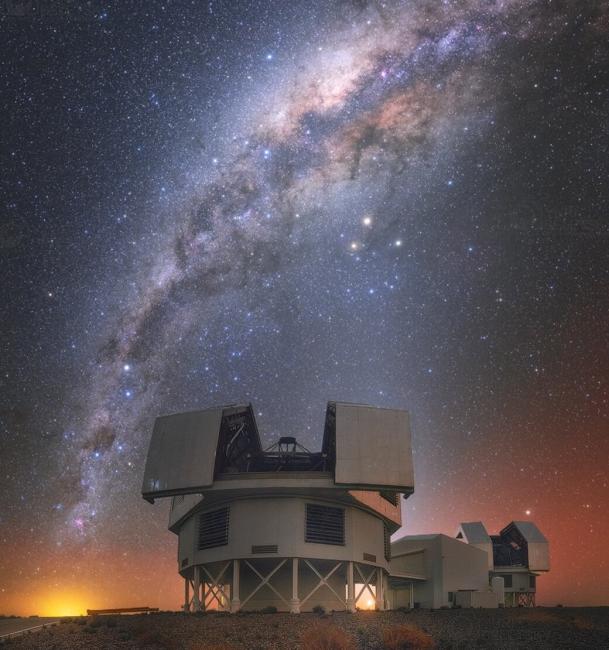 This photograph shows the Milky Way in the skies over the twin Magellan Telescopes, located at Las Campanas Observatory in Chile.

The Magellan Telescopes both have 6.5-meter mirrors, making them the same size as the MMT Observatory at CfA’s Fred Lawrence Whipple Observatory (FLWO) in southern Arizona. The Las Campanas Observatory, which hosts the telescopes, is located at an elevation of 2400 meters in the Atacama Desert of Chile. The high elevation and dry conditions lead to good observational conditions for more than 300 nights of the year.

The two telescopes are named for astronomer Walter Baade, one of the early researchers into supernovas and galactic structure, and philanthropist Landon T. Clay. The Magellan Baade telescope began observations in 2000, while the Clay telescope started in 2002. The Magellan Clay Telescope is equipped with adaptive optics: flexible secondary mirrors that change shape to compensate for distortions in images caused by air. Adaptive optics allow the Magellan Clay Telescope to produce extremely clear, sharp images.

The Magellan Telescopes carry a suite of instruments designed to produce those images, as well as analyze the spectrum of light from astronomical sources. One of those instruments on the Clay telescope is Megacam, which was designed built by scientists and engineers at the CfA. This is an array of 36 charge-coupled device (CCD) detectors, the same basic technology used in digital cameras, each of which produces images 2048 X 4608 pixels in size. Other instruments include spectrographs for splitting light into its component colors to identify chemical composition and measure motion: the Magellan Inamori Kyocera Echelle (MIKE), the Low Dispersion Survey Spectrograph (LDSS3-C), the FIRE (Folded port InfraRed Echellette), and the MagE (Magellan Echellette) Spectrograph. The Inamori Magellan Areal Camera and Spectrograph (IMACS) both takes images and measures spectra, and the FIRE (Folded port InfraRed Echellette) spectrograph allows the Baade telescope to study infrared spectra.

The Magellan Telescopes are powerful general purpose observatories, used to study a wide variety of astronomical objects from the Solar System to distant galaxies. For example, the Magellan Planet Search project uses the MIKE instrument and the Planet Finder Spectrograph on the Clay telescope to identify exoplanets.