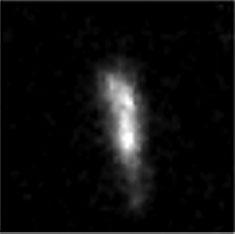 The Hubble image of a galaxy spotted by Spitzer's IRAC infrared camera to be variable, probably because it harbors an active galactic nucleus. IRAC infrared surveys taken over a decade have spotted about 800 previously unknown AGN.

The nuclei of most galaxies host supermassive black holes with millions or even billions of solar-masses of material. Material in the vicinity of such black holes can accrete onto a torus of dust and gas around the black hole, and when that happens the nuclei radiate powerfully across the full spectrum. These active galactic nuclei (AGN) are among the most dramatic and interesting phenomena in extragalactic astronomy, and puzzling as well. Exactly what turns the accretion on or off is not understood, nor is how the associated processes produce the emission, generate jets of particles, or influence star formation in the galaxy.

Because AGN play an important role in the evolution of galaxies, astronomers are studying galaxies with AGN at cosmological distances. It is in earlier epochs of the universe, about ten billion years after the big bang, when the most significant AGN fueling is thought to occur. But AGN at these distances are also faint and more difficult to find. Historically, they have been spotted by their having very red colors due to heavy dust obscuration, characteristic emission lines (signaling very hot gas), and/or their variability.

CfA astronomers Matt Ashby, Steve Willner and Giovanni Fazio and two colleagues used deep infrared extragalactic surveys taken over 14 years by the IRAC instrument on the Spitzer Space Telescope to search for distant AGN. The various surveys in the archive repeatedly scanned different portions of the sky over as many as eleven epochs in their efforts to peer deeper and farther into the cosmos, and the multiple observations allow spotting variable sources. The astronomers found almost a thousand infrared-variable galaxies in these surveys, about one percent of all the galaxies recorded. They estimate that about eighty percent of these variable sources are AGN, the others being due either to supernovae or spurious data. The variability had not been seen in studies at other wavelengths because of the heavy obscuration around the nuclei and/or the weakness of X-ray emission; the infrared can peer through the obscuring dust. The team examined Hubble images of the sources and finds that a majority show indication of disruption, perhaps from a galaxy-galaxy collision. Their results suggest that mid-infrared variability identifies a unique population of galaxies with AGN.