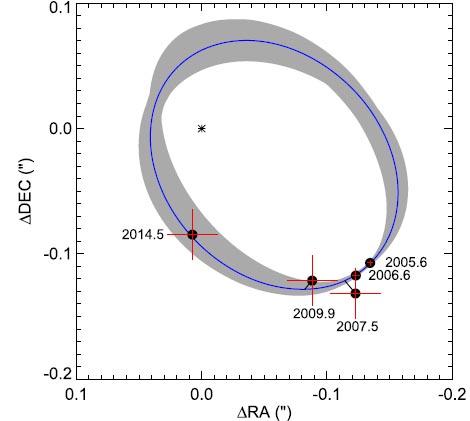 A schematic showing the orbit of the star Polaris Ab around the bright Cepheid variable star Polaris Aa; the period is 29.59 years. Astronomers have combined a new analysis of the orbit with a new distance measurement from the Gaia satellite to refine the properties of Polaris Aa, which are significantly different from some earlier proposed values.

The North Star, Polaris, is a Cepheid variable: one whose mass, age and physical conditions generate periodic oscillations with a period proportional to the star's intrinsic luminosity. This extraordinarily useful property of Cepheid variables, discovered and calibrated at Harvard by Henrietta Leavitt starting in 1908, allows them to be used as cosmic distance calibrators. By comparing the intrinsic brightness as determined from the period (which is easily measured) with the measured brightness, the period-luminosity relationship, a precise distance can in principle be obtained. Cepheids in nearby galaxies that are receding from us provide the basis for the famous distance-velocity relationship of galaxies that underpins the expanding model of the universe (the "big bang" model). Cepheids are so important that they have also become benchmarks for testing our understanding of stellar evolution.

Polaris is not only famous as the beacon for early navigators, it is also the closest Cepheid to earth (445.5 light-years away), and a subject of intense study. It is a member of a triple system, and one source of confusion about its development has been the extent to which its companion stars could have affected its evolution. The star we can see by eye, Polaris Aa, has a close companion, Polaris Ab that orbits it in 29.59 years; a third star, Polaris B, orbits these two but is one hundred times farther away. Two more stars nearby, Polaris C and D, might also be faint companions.

Three CfA astronomers, Nancy Remage Evans, Margarita Karovska, and Evan Tingle led a team that has been monitoring Polaris with the Hubble Space Telescope since 2005. In their images they are able to resolve the two stars Aa and Ab and to follow their apparent separation which varies during the orbit; the most recent separation of these two in their mutual elliptical orbit is only about twelve astronomical units (about the distance of Saturn from the Sun). They have now incorporated into their results the newly released data from the Gaia mission, a spacecraft that has been measuring with new precision the distances to over a billion stars. The distance to Polaris (the above-mentioned value is from Gaia) settles a long-standing uncertainty about the distance which earlier authors found to be between about 326 light-years to 522 light-years. The newly reliable distance also fixes the intrinsic luminosity and thus enables a more careful calibration of Polaris’ period-luminosity relationship.

The situation is not what astronomers had previously thought. Polaris has a significantly lower mass (3.45 solar-masses, with an uncertainty of about 22%) than was predicted by conventional Cepheid models (one value was close to seven solar-masses). There is also evidence that Polaris Aa has undergone some mass loss, that its age is slightly older than expected from the models, and (not least) that the evolution may have been very complicated indeed with the triple system resulting from a prior merger event. While these critical issues do not dramatically alter the general conclusions about Cepheid stars, they do show that further refinements to our understanding of Cepheids will be vital to a more accurate and unambiguous period-luminosity relationship; tracking the orbit longer will help.