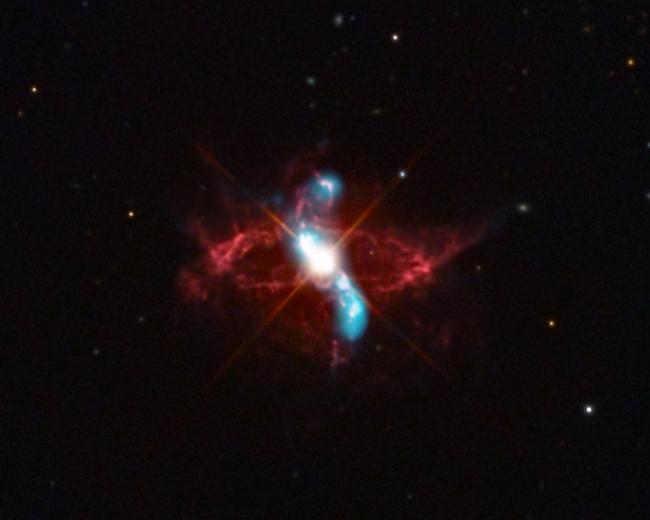 In biology, "symbiosis" refers to two organisms that live close to and interact with one another. Astronomers have long studied a class of stars — called symbiotic stars — that co-exist in a similar way. Using data from NASA’s Chandra X-ray Observatory and other telescopes, astronomers are gaining a better understanding of how volatile this close stellar relationship can be.

R Aquarii (R Aqr, for short) is one of the best known of the symbiotic stars. Located at a distance of about 710 light years from Earth, its changes in brightness were first noticed with the naked eye almost a thousand years ago. Since then, astronomers have studied this object and determined that R Aqr is not one star, but two: a small, dense white dwarf and a cool red, giant star.

The red giant star has its own interesting properties. In billions of years, our Sun will turn into a red giant once it exhausts the hydrogen nuclear fuel in its core and begins to expand and cool. Most red giants are placid and calm, but some pulsate with periods between 80 and 1,000 days like the star Mira and undergo large changes in brightness. This subset of red giants is called "Mira variables."