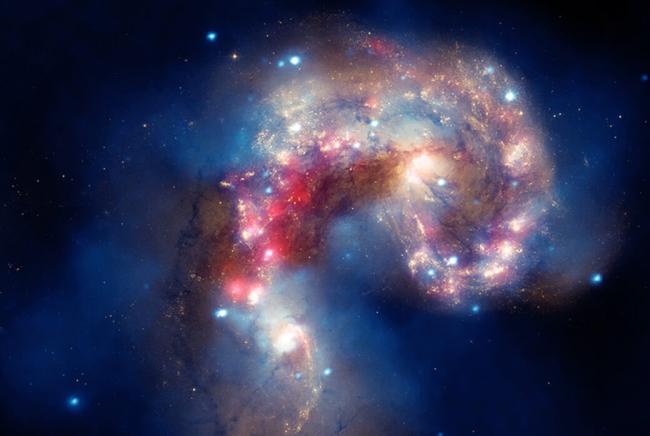 This multiwavelength view of the colliding galaxies known as the Antennae includes X-ray data from NASA's Chandra X-ray Observatory. The X-rays, colored blue in this image, reveal the presence of very hot plasma.

Earth’s atmosphere blocks nearly all high-energy light, including X-rays, requiring astronomers to build space telescopes to observe the X-ray universe. The Chandra X-ray Observatory was launched aboard the Space Shuttle Columbia in 1999, and has been in continuous operation ever since. Its orbit takes it in a long ellipse, reaching its greatest height above Earth of 139,000 km (86,500 mi), which is more than a third of the way to the Moon.

Chandra’s science instruments have allowed it to produce phenomenal astronomical results. X-rays are generated by many astrophysical systems, primarily by hot plasma, which is gas where electrons have been stripped from their atoms. To summarize just a small portion of the observatory’s career, astronomers have used Chandra to:

CfA | Harvard & Smithsonian researchers and engineers provided the High Resolution Camera (HRC) to the Chandra mission, which is one of two cameras used to create astronomical images. As the name conveys, it provides a high resolution of up to half an arc-second, which is roughly 60 times the resolution of the human eye — an achievement all the more impressive because X-rays are harder to focus than visible light. Chandra’s other instruments include the ACIS (Advanced CCD Imaging Spectrometer) and gratings providing high-resolution spectroscopy when combined with either HRC and ACIS.

Engineers gave Chandra its excellent resolution through the construction of its special mirrors, which are “grazing incidence”. X-ray photons penetrate most materials rather than reflecting, so grazing incidence mirrors guide deflect the light gently, like skipping a rock over the surface of a pond. Chandra’s mirrors are remarkable achievements, being very smooth and clean to provide extremely detailed X-ray images.

The Chandra Source Catalog (CSC) is one of the finest and largest catalogs of X-ray data currently available. It contains information about the X-ray properties (photometry, spectroscopy, and variability) of more than 315,000 sources in the sky, including X-ray binaries, supernova remnants, super massive black holes in the center of galaxies, and the most energetic young stars in our galaxy. There is a lot to be discovered using the CSC, because many of its sources are serendipitous, which means no one was looking for them when they were observed. In the era of Big Data, Machine Learning, and multi-wavelength astronomy, the CSC is an invaluable resource to enhance our knowledge about the most energy objects in the Universe and to expand our discovery horizons.

Chandra’s day-to-day operations including spacecraft control, flight operations, data management, observation proposal and planning, and science support for astronomers are all handled through the Chandra X-ray Center (CXC) in Cambridge, Massachusetts. CXC scientists and other staff schedule observations, handle data downloads and processing, and ultimately make all the data available through the Chandra website in accordance with NASA policy.