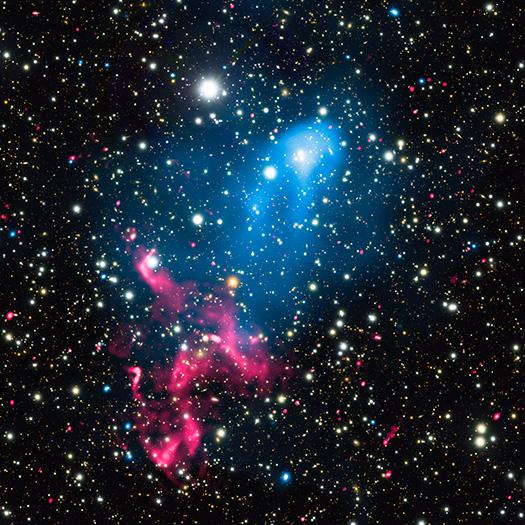 Astronomers have discovered a cosmic one-two punch unlike any ever seen before. Two of the most powerful phenomena in the Universe, a supermassive black hole, and the collision of giant galaxy clusters, have combined to create a stupendous cosmic particle accelerator.

By combining data from NASA's Chandra X-ray Observatory, the Giant Metrewave Radio Telescope (GMRT) in India, the NSF's Karl G. Jansky Very Large Array, and other telescopes, researchers have found out what happens when matter ejected by a giant black hole is swept up in the merger of two enormous galaxy clusters.

"We have seen each of these spectacular phenomena separately in many places," said Reinout van Weeren of the Harvard-Smithsonian Center for Astrophysics (CfA) in Cambridge, Mass., who led the study that appears in the inaugural issue of the journal Nature Astronomy. "This is the first time, however, that we seen them clearly linked together in the same system."

This cosmic double whammy is found in a pair of colliding galaxy clusters called Abell 3411 and Abell 3412 located about two billion light years from Earth. The two clusters are both very massive, each weighing about a quadrillion — or a million billion — times the mass of the Sun.