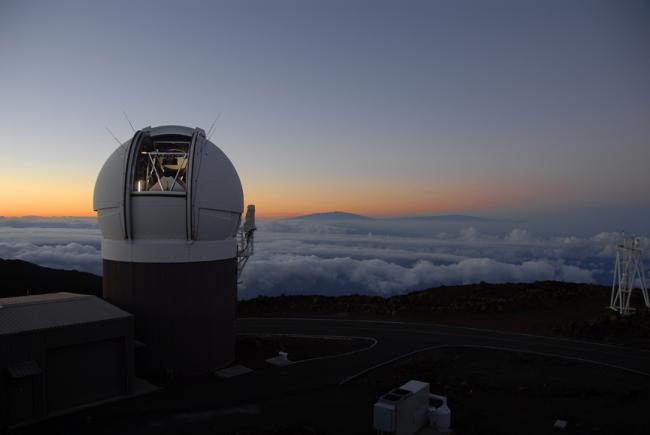 A photo of the PanSTARRS (Panoramic Survey Telescope & Rapid Response System) telescope in Hawaii. Astronomers have used a sky survey from this facility to identify a class of blue, hypervariable galaxies; the origin of the variability is uncertain but might in some cases be due to microlensing.

Extreme variability in the intensity of the optical light of galaxies, by factors of two or more, is of great interest to astronomers. It can flag the presence of rare types of supernovae, for example, or spot sudden accretion activity around quiescent black holes or around the supermassive black hole at the galaxy’s nucleus. In recent years systematic searches for such variability have been made using instruments that can survey wide swaths of the sky. One, the Panoramic Survey Telescope & Rapid Response System (PanSTARRS), is a facility capable very wide-field imaging using a combination of relatively small mirrors coupled with very large digital cameras, and it can observe the entire sky accessible to it several times a month.

CfA astronomer Martin Elvis was part of a team of scientists that looked for variability in galaxies by comparing PanSTARRS images of the sky with images taken by an earlier survey, the Sloan Digital Sky Survey, about ten years before; the results were followed up with several other telescopes. Their comparison spanned nearly one-third of the whole sky. After sifting through thousands of apparent transients per month to check, among other things, for accurate spatial coincidences, that the candidates were galaxies, and that multiple observations confirmed the variability, the team reports finding seventy-six reliable objects. Spectroscopic followups and other observations were then able to classify these into nine categories, including supernovae and radio-emitting galaxies. In the end, the team found fifteen hypervariable sources that have brightened by almost a factor of ten in the past decade; light from the most distant one of these has been traveling for about nine billion years. The galaxies' light is blue in color and has been steadily changing, usually getting weaker.

The astronomers offer four possible explanations for these strange objects. The first is microlensing: the variability is due to gravitational lensing effects by a star in a foreground galaxy. Since it seems likely that this must happen sometime, this option is slightly preferred by the authors. Variable accretion onto a black hole is another possibility, but there are no convincing physical models to describe the detailed results yet. Two other options, the tidal disruption of a passing star by a dormant black hole or variable extinction by a clumpy medium in the galaxy, seem less likely. The scientists suggest some new observations that could help sort out these different possibilities, not the least of which is a larger systematic monitoring program to increase the statistics of these strange, blue, hypervariable galaxies.