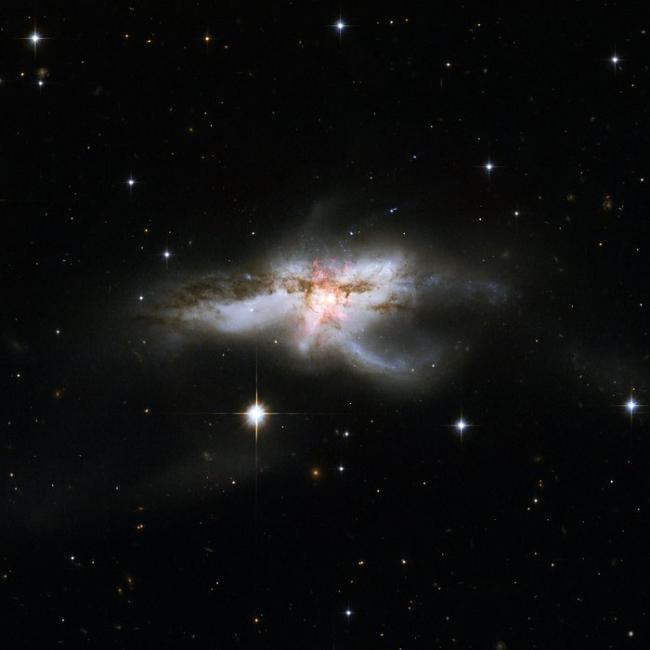 A Hubble image of the merging galaxies NGC 6240. Like other luminous mergers, this one hosts a rapid flow of molecular gas. Astronomers have now imaged the carbon monoxide gas in the central regions and found it forms jet-like outflows driven by activity around the black holes.

A merger between galaxies can trigger can intense radiation from bursts star formation and from the accretion of gas onto the two supermassive black holes at their centers. Astronomers have observed a strong statistical correlation between the masses of these black holes and other properties of the galaxies like their velocity structure or luminosity, and have concluded that there must be a connection. Feedback of some kind seems most likely to explain these correlations, and astronomers have been working to identify its source and nature. One prominent suggestion for feedback is an outflow of molecular gas; once turned on, it would deplete the galaxy of the raw material needed for making new stars and from further enhancing the black hole's mass. Evidence for molecular outflows has been reported in far infrared lines of molecules, but these spectral results lack the convincing spatial information needed to associate the activity with the nuclei themselves.

CfA astronomer Junko Ueda is a member of a team of fifteen astronomers who used the ALMA submillimeter telescope facility, with its superb spatial imaging capabilities, to study the outflow in the luminous galaxy NGC6240, known to be a luminous merger in its late stages. Its double nuclei, separated by a modest two thousand light-years, has already been seen at wavelengths from the X-ray to the radio. The astronomers used one of the spectral lines from the abundant molecule carbon monoxide to probe the inner region of the galaxy. The line also revealed the presence of gas motions of up to two thousand kilometers per second, consistent with a powerful wind driving a massive flow of material out of the galaxy.

The new images were able to identify for the first time several regions of outflow activity located only a few thousand light-years from the black holes and aligned as though they were driven by processes associated with the nuclear black holes. Moreover, these regions are spatially coincident with other indicators of general activity like shocked gas and X-rays. The new results are one of the first demonstrations that the widely seen molecular outflow activity does originate from black hole feedback mechanisms.