The Nature of Galaxy Cluster Mini-Halos 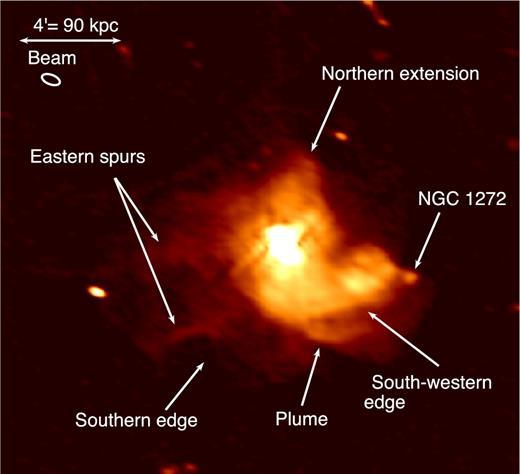 A galaxy cluster mini-halo as seen around the galaxy NGC 1275 in the radio, with its main structures labeled: the northern extension, the two eastern spurs, the concave edge to the south, the south-western edge and a plume of emission to the south-south-west. Astronomers used radio and X-ray data to conclude that mini-halos, rather than being simple structures resulting from turbulence, are actually the result of multiple processes.

A mini-halo is a faint, diffuse region of radio emission that surrounds a cluster of galaxies. So far about thirty of these cluster mini-halos have been detected via their X-ray and radio emission, the result of radiation from electrons in the ionized gas, including one mini-halo in the nearby Perseus cluster of galaxies. These electrons are thought to arise from activity around a supermassive black hole at a galactic nucleus, which injects steams of particles into the intracluster medium and which also produces turbulence and shocks. One issue puzzling astronomers is that such electrons should rapidly lose their energy, faster than the time it takes for them to reach the mini-halo regions. Suggested solutions include processes in which turbulence reaccelerates the electrons, and in which cosmic rays generate new ones.

CfA astronomer Reinout van Weeren and his colleagues used the radio Karl G. Jansky Very Large Array (JVLA) to obtain the first detailed study of the structure of the mini-halo in Perseus, and to compare it with Chandra X-Ray images. They find that the radio emission comes primarily from gas behind a cold front as would be expected if the gas is sloshing around within the cluster as particles are re-accelerated. They also detect unexpected, filamentary structures that seem to be associated with edges of X-ray features. The scientists conclude that mini-halos are not simply diffuse structures produced by a single process, but reflect a variety of structures and processes including turbulent re-acceleration of electrons, relativistic activity from the black hole jets, and also some magnetic field effects. Not least, the results demonstrate the sensitivity of the new JVLA and the need to obtain such sensitive images to understand the mini-halo phenomenon.