Theory is how scientists fit data collected from observation into a system of understanding. However, some astrophysical systems are too complicated to be treated adequately using straightforward theoretical calculations. These include the extreme environments near stars, black holes, and other places where strong gravity, magnetic fields, and high-temperature matter combine in complex ways. Systems like those require computational astrophysics, where researchers simulate the system on a computer and compare what they find with observations.

Center for Astrophysics | Harvard & Smithsonian astrophysicists use computer models for a huge variety of astronomical systems:

The Cosmos Via Computer

Over the past few decades, computers have become fast enough and storage cheap enough to make computational astrophysics a powerful tool for astronomy, alongside telescope or spacecraft observations, theoretical models, and laboratory experiments. Every astronomical researcher today uses computers in some aspect of their work, but computational astrophysics — creating computer models of entire astrophysical systems — is an established method on its own, providing a way to tackle problems that would be otherwise too time-consuming or difficult.

Computational astrophysics is complementary to both lab work and theory, allowing researchers to run many simulations of the same system, or change the parameters of an astrophysical model to check how the outcomes differ. Computation can also be used to compare different models of a system to determine which one fits observational data best.

Computational astrophysics is an important method in many different areas of research: 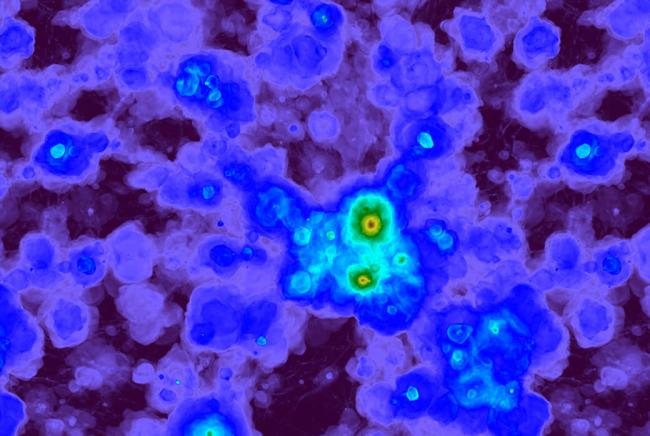 A simulation using the Illustris project of the effect of light from the cosmic microwave background scattering from hot gas in galaxy clusters. This is known as the Sunyaev-Zel'dovich effect, which allows researchers to obtain important information about the evolution of the cosmos.

Harvard University Department of Astronomy, Institute for Theory and Computation
The Big Bang theory of cosmology successfully describes the 13.7 billion years of evolutionary history of our Universe. However, it is known that the origin of the Big Bang is incomplete. We are interested in finding out what caused the Big Bang, and the physics involved in this primordial epoch. We study physics, build models and propose observables for the primordial universe using quantum field theory, general relativity and/or string theory, and test them with data from astrophysical observations.
2