Nearly every galaxy harbors at least huge black hole. The powerful gravity from some of those black holes create powerful storms of matter and light, to the point where they outshine their host galaxies and can be seen from billions of light-years away. These black holes include the some of the brightest single objects in the whole universe, and are called “quasars”, “active galactic nuclei”, and other names that describe their appearance to observers.

Center for Astrophysics | Harvard & Smithsonian scientists study many aspects of AGNs using a variety of techniques:

The Engines of Gravity

Astronomers have found supermassive black holes in most galaxies. These weigh in at millions or billions of times the mass of the Sun, but only a few  of them are “active” at any one time. To be an active galactic nucleus (AGN), the black hole has to collect a lot of gas around it, where it heats up and glows brightly. In some cases, the black hole also generates huge jets of matter, which stream out at nearly the speed of light. Some jets stretch several times farther than the size of the host galaxy.

What an AGN looks like in our telescopes depends on the angle we’re viewing it. For instance, if the jet is pointing more or less toward Earth, the AGN will appear very bright, even outshining the host galaxy. In those cases, astronomers call the AGN a “quasar” or “blazar”. If the jets aren’t pointing toward Earth or the black hole doesn’t produce jets, the AGN might still be bright, but take on a different look. When the bulk of the galaxy is between us and the black hole, it is only visible in X-ray or infrared light, creating an entirely different appearance. These other AGN are known variously as Seyfert galaxies, radio galaxies, and many other names, depending on their particular appearances in observations. 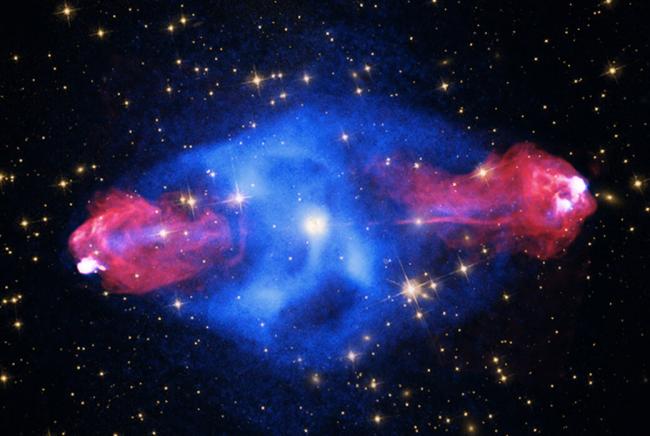 Jets of hot gas are ejected by the supermassive black hole at the center of the galaxy Cygnus A. This image shows the galaxy in radio waves (red color), X-rays (blue), and visible light (yellow), revealing how black holes shape their galactic environment.

What We Hope to Find

The brightest AGNs can be trillions of times the brightness of the Sun, so they serve as cosmic beacons when mapping the structure of the universe on the largest scales. However, astronomers also study AGNs as important objects in themselves, to understand how black holes power the jets and the orbiting donuts of hot gas known as accretion disks, which make them so bright. The powerful flows of matter from AGNs can shut down star formation through the whole galaxy.

The evolution of galaxies and their supermassive black holes are closely linked. Most AGNs are in distant galaxies, and some quasars are in galaxies that formed very early in the history of the universe. Meanwhile, nearby supermassive black holes are typically less active, including the Milky Way’s. AGN jets and other outflows are also responsible for spreading material through galaxies and galaxy clusters, which changes the chemistry of their environments. These jets also illuminate the material between galaxies, which would otherwise be invisible. 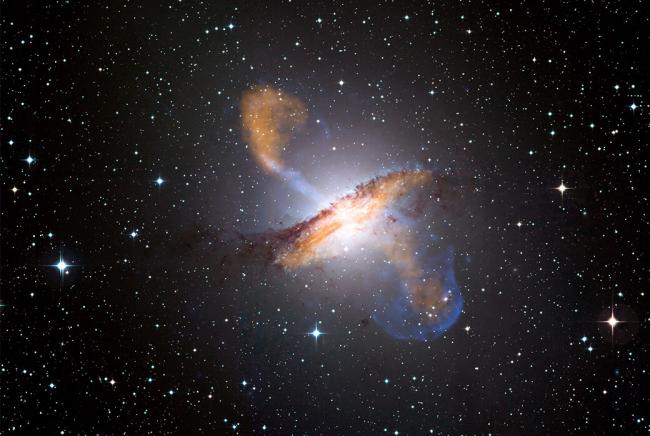 The supermassive black hole at the center of the active galaxy Centaurus A produces the bright jets seen here, measured to move at half the speed of light. The image combines submillimeter light (orange color), X-rays (blue), and visible light.